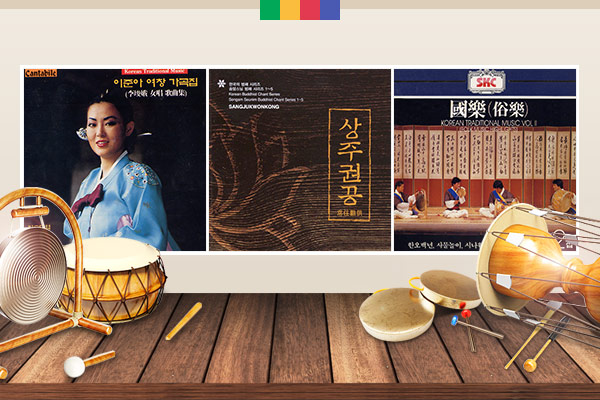 The term “gagok가곡” refers to poems set to music. A gagok piece includes all the signature traditional instruments, such as gayageum, geomungo, daegeum, and janggu. It is organized into two parts - three movements that follow a prelude and then two more movements after an interlude. A gagok series proceeds from slow to fast-paced with male and female singers performing in alternately until the last song, usually “Taepyeongga태평가” sung together by both male and female performers. The first song we’re going to hear today is an “urak우락” sung by female singers.

The wind blows strong enough to rock the ground and the rain is pouring down.

Tonight was the night when my love and I were supposed to meet.

But how can he come in the middle of such a furious storm?

If he does come, we are destined to fall in love.

Its lyrics describe a woman yearning to see her love despite such adversities as heavy rain and strong winds. Here’s Lee Jun-ah singing an urak song titled “The Wind Is.”

Urak songs are quite fast-paced among Korean gagok pieces, but they may still sound very slow to those used to today’s rap music or pop songs. In the old days when people with high social standings or much wealth needed entertainment, they would call professional artists and enjoy their music in a leisurely manner. Even when the songs picked up the beat as the musicians’ emotions began to build up, they would still be considered quite slow by today’s standards. A gagok song is organized in such a way that a short poem is set to long, slow melodies, which makes the song sound very drawn out and boring. Such a singing technique is often found in beompae범패 or Buddhist hymns. But when you listen to the elegant blending of instrumental music and human voice, you will soon realize that the music has a calming effect and brings serenity to your heart. Introduced to Korea from China around the 8th century, beompae refers to Buddhist scriptures or teachings set to music. Beompae songs were passed down orally and had gone lots of changes over the past 1,200 years, but still retains their unique ceremonial vibe. When a Buddhist temple hosts a big event and there isn’t enough room inside the main prayer hall to accommodate all visitors, event organizers sometimes put up a large painting of Buddha in the yard for those who cannot enter the main hall. The song we’re going to enjoy next is “Jitsori Geoyeongsan짓소리 거영산,” a song performed when Buddha’s painting is brought out to the yard. This beompae song, which continues on for almost 10 minutes, is sung by Buddhist monk Songam.

Jitsori was sung by multiple people when they were on the move. It’s amazing that a group of people can sing such a long and wildly fluctuating tune for so long. So it’s believed that jitsori songs are best performed by seasoned vocalists. Along with gagok and beompae songs that we learned about today, pansori is considered Korea’s three greatest vocal genres. Usually sung in front of a large audience, pansori songs can be enjoyed more fully when the pansori singer and the audience are emotionally connected. A pansori singer starts off with a short song called ‘danga단가’ to assess audience reaction, and when audience members respond with their own exclamations or ‘chuimsae추임새,’ the singer is motivated to perform more energetically. Today’s last piece is “Beompijungryu범피중류” from pansori Simcheongga. This passage describes Simcheong’s last boat ride before sacrificing herself to the sea god and how the world remains quiet and beautiful before Simcheong’s personal tragedy. Today’s version is sung by Seong Chang-sun.