Korean songs based on Chinese tales 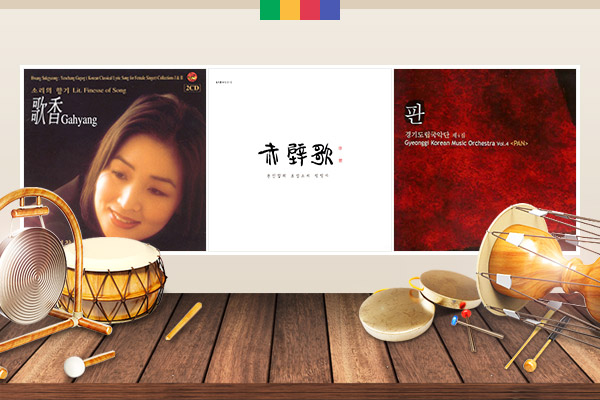 The term ‘gagok가곡’ refers to a poem put to a melody. The Chinses poem titled “Ilsobaekmisaeng일소백미생,” which means one smile begets a hundred flirty behaviors, is one such gagok. The poem is about Yang Guifei, reportedly the most beautiful and beloved of Chinese emperor Tang Xuanzong’s consorts. The emperor loved Yang Guifei so much that he neglected his royal duties and failed to run the country properly, eventually sparking a massive revolt that forced the emperor’s family and his court officials to flee to the state of Shu located in the modern-day Sichuan region. While running away from the rebels, government officials blamed the emperor’s favorite concubine for ruining his good judgment. Hounded by his officials, the emperor ordered Yang Guifei to end her own life. If the emperor had been a moral man with a strong sense of duty, he would not have run the country to the ground no matter how beautiful and seductive his concubine was. Imagine how bitter she would have been when the emperor ordered her to commit suicide. Here’s Hwang Suk-gyeong singing “Ilsobaekmisaeng” in memory of the beautiful Yang Guifei.

Yang Guifei was probably given no opportunity to defend herself since men were the ones running the government back then. “Ilsobaekmisaeng” is a song that speaks on behalf of the tragic concubine. There are quite a few old Korean songs based on the untold stories of misunderstood or little-known historical characters. Pansori “Jeokbyeokga적벽가” is among them. “Jeokbyeokga” or “Song of the Red Cliff” was inspired by classic Chinese novel “Romance of the Three Kingdoms.” While the Chinese story features powerful men like Liu Bei, Cao Cao, and Zhuge Liang, the Korean pansori is a bit different in that it sings about all the nameless soldiers who perished in the war. Most of the soldiers were just ordinary farmers who were suddenly called to fight in a war that they had no interest in. They must have been so scared and worried about their families left behind. Pansori “Jeokbyeokga” tells each of their stories, which resonated deeply with audience members who were probably ordinary people like the soldiers. In the pansori piece, General Cao Cao is depicted as a cowardly and nasty man, who flees from battle to save his own life when most of his soldiers were killed in action. Here’s Yun Jin-cheol singing that passage from pansori “Jeokbyeokga.”

Although “Romance of the Three Kingdoms” is a Chinese classic, its subject matter inspired many Korean traditional songs. The battle of the red cliff took place at the end of the Han dynasty in the 3rd century. Another Chinese literary classic that influenced Korean music is “Romance of the Chu-Han Contention” about the founding of the Han dynasty by Liu Bang in the 2nd century BC. Han dynasty founder Liu Bang battled Xiang Yu of the western Chu region before uniting most parts of China. Xiang Yu, a noble-born warrior, was defeated completely when Han soldiers surrounded the Chu forces and sung songs from their home. Homesick and discouraged, the Chu troops abandoned their weapons and returned to their hometowns, leaving Xiang Yu with no other option than to take his own life and allowing Liu Bang to conquer the entire country. This story provided the basis for an ancient boardgame of Chinese chess. This week’s episode will conclude with “Janggi Taryeong” or “The Song of Chinese Chess.” This song has five verses but interestingly only the last one is about chess. This song is made more unique by listing characters from the Battle of the Red Cliff appear in the last verse. Let’s wrap up the show with “Janggi Taryeong” sung by Choi Geun-sun, Choi Eun-ho, Park Jin-ha and Lee Na-hyeon.