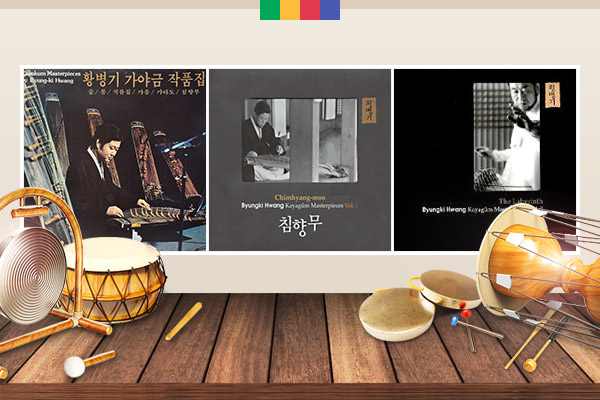 Gayageum is estimated to have been created at least before the sixth century, giving it a history of more than 1,500 years. Originally, the instrument had twelve strings on top of the body made of royal foxglove tree, but these days a 25-string gayageum is often used to play creative pieces. Even people who are unfamiliar with traditional music count gayageum as the most iconic Korean instrument. Its clear and light timbre allows a musician to express a wide range of emotions and music genres. It has become commonplace to see gayageum players perform even western music and modern creative pieces on gayageum. The pioneer in the field of creative gayageum works is undeniably Hwang Byung-ki. In the 1960s, many gugak musicians gave up music and traditional music were slowly disappearing. That was when Hwang Byung-ki released a gayageum solo piece titled “Forest” to demonstrate the instrument’s immense potential. This week’s episode will begin with the second movement “Cuckoo” and the third movement “Rain” from “Forest.” Hwang Byung-ki plays the gayageum and Ahn Hye-ran the janggu.

Hwang first started playing gayageum in Busan in 1951 when he was a middle school student. In the year he graduated from Seoul National University School of Law, the country’s first traditional music department in the university’s college of music was established and at the recommendation of then-music college dean Hyun Je-myeong현제명, Hwang came to work as a gugak instructor. Back then, gugak musicians were looked down on, so it was unconventional for an SNU law school graduate to become a Korean traditional musician. Hwang was obviously torn, but Dean Hyun Je-myeong convinced him to start a new career by saying that there will be plenty of lawyers but very few gayageum players and that he shouldn’t miss out this chance to do something special. Hwang was always interested in making a new kind of music. He wrote “Forest” first as a gagok가곡, Korean lyric song, based on poet Park Doo-jin’s 박두진 “Cheongsando청산도” meaning the road to Blue Mountain, but soon changed his mind and wrote a gayageum piece because gayageum was his specialty. “Forest” put him on the map as a premier composer and traveled around the world to introduce the iconic Korean instrument. Coming up next is “Chimhyangmu침향무,” probably the most widely played work of Hwang Byung-ki. This piece the title of which means “dancing among agarwood incense” was inspired by the dance the people of Silla신라 used to perform in front of Buddha. Today we’ll listen to the second and third movement from the opus.

Hwang wrote “Chimhyangmu,” released in 1974, while imaging what the music of Silla would have sounded like. So instead of playing the gayageum in a conventional way, he experimented with new methods, like using his fingernails to scratch the strings. He used this approach to the janggu as well, drumming on the body instead of the batter heads at both ends. His original playing style and exotic melodies won him worldwide attention. Now we will listen to “Migung미궁” or “The Labyrinth,” likely the most exceptional work of his. This music was commissioned for the International Contemporary Music Festival held at the National Theater of Korea in 1975. It was clear that he was determined to compose a very modern and avant-garde piece. He drew a bow across the gayageum like a violin and rubbed the gayageum body with janggu sticks. He even included the sounds of people laughing and crying to create singular sound effects. This piece was so unusual and shocking that performing it was banned for three years and it gave rise to an urban myth among teenagers that you would die if you heard this music three times. Let’s test our fate by listening to the beginning part of “Migung” with Hwang Byung-ki at the gayageum and Hong Sin-cha providing her voice.