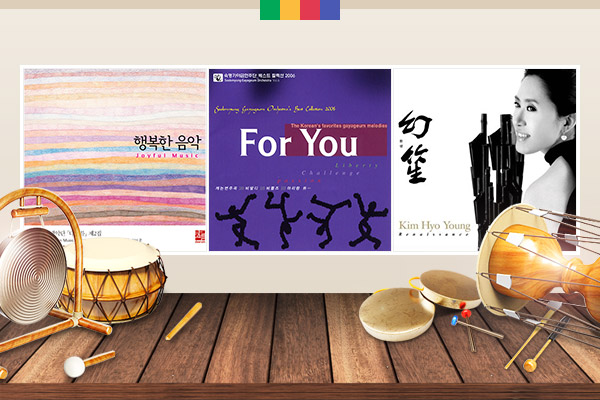 There are basically twelve musical notes in Korean traditional music as there are in western music. The number of notes may match, however, the pitch of each note does not. Moreover, Korean music employs some playing techniques not often seen in western music, such as nonghyeon농현 or yoseong요성. These techniques are similar to vibrato in western music in that a player waggles the strings of a string instrument or jiggles a wind instrument itself to produce vibrating sounds. However, the range of vibration produced by Korean instruments is so much wider than the vibration created by western music that sometimes the sound oscillates between two keys. Consequently, it is not easy to play Korean traditional music with western instruments and vice versa. However, traditional instruments have been modified in recent years to produce more diverse sounds to play western music pieces with traditional instruments. The first piece for today’s Sounds of Korea episode is “New York, New York” performed by Dasrum다스름, a gugak chamber orchestra composed entirely of female musicians. It is a long-standing musical group established back in 1990 that has earned high reputation through many overseas concerts. The orchestra played western songs and music pieces with Korean instruments to win rave reactions from foreign audiences. Let’s listen to the gugak version of “New York, New York.”

Gayageum was reportedly created by King Gasil가실 of Gaya Kingdom. Royal fox glove tree trunk is carved out like a boat to make the body and silk threads are entwined to create twelve strings. The instrument has undergone various modifications since the late Joseon period. The upper body part was made of royal fox glove tree while the lower platform was made of chestnut tree. This type of gayageum, smaller than the conventional ones, was named the sanjo gayageum for playing fast-paced music. Since then, different gayageum models were created, such as the steel-stringed gayageum or the 13, 15, and 17-string gayageums. These days, the 25-string gayageum is largely used to play creative pieces. The strings of this gayageum model are made of synthetic fiber rather than silk to produce lighter tones.

Gugak musicians often play western pop songs or movie original soundtracks but they seem to most favor jazz. It may be that the impromptu and free atmosphere of jazz resonates well with Korean folk music. Concluding this week’s episode are two jazz pieces – “Libertango” by saenghwang생황 player Kim Hyo-young and “Take Five” by Ensemble SU. Many ordinary Koreans may not be familiar with the saenghwang, but it is the only Korean traditional instrument that can create harmony. Several bamboo pipes are mounted vertically to its windchest and a player blows into a blowhole to make sounds from the pipes. Each pipe is fitted with a small metal reed which vibrates to produce exotic sounds. It is very similar in principle to the pipe organ of West. People in the old days used to claim that the sound of saenghwang resembled the cry of a dragon. As for Ensemble SU, it is a musical group comprised of three gugak musicians of gayageum, haegeum and a traditional percussion instrument and western players of the piano and cello. You will be able to hear the perfect harmony created by gugak and western instruments. Here are Kim Hyo-young performing “Libertango” and Ensemble SU “Take Five.”