"Time of Distrust" by Park Kyong-ni 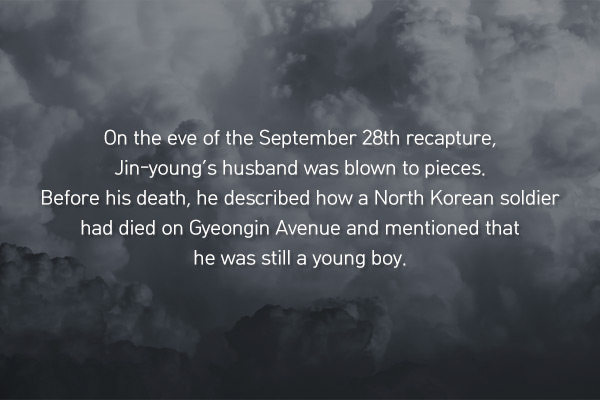 On the eve of the September 28th recapture, Jin-young’s husband was blown to pieces. Before his death, he described how a North Korean soldier had died on Gyeongin Avenue and mentioned that he was still a young boy.

The boy was calling for his mother like in a dream even as he was pleading for a sip of water.

As if he was predicting his own death, Jin-young’s husband was killed in an explosion just a few hours after he had told that story.

There was a cluster of children in the shade under a tree. Next to it was a middle-aged man who was selling crosses and copies of Bible spread on the ground. Jin-young was watching the whole scene as if she was a stranger from a faraway region. Chilly winds were sweeping through her heart unmoved by the atmosphere.

The Mass was almost over when Jin-young saw a collection basket hung on a long pole approach her. Once her relative hurriedly tossed in a few coins, the offering basket slowly moved onto the back row.

Jin-young was reminded of a street musician’s tattered hat that was passed among the crowd. That image prompted her to leave the church.

Jin-young represents all those unfortunate women living tragic lives following the Korean War. It is believed that Jin-young is the persona of this story’s author Park Kyong-ni. Park’s husband was imprisoned during the Korean War before going missing. To make matters worse, Park’s own son dies, making her life unbearably painful. Jin-young’s life in this story summarizes Park’s own sufferings and getting ill herself while trying to survive in extreme poverty. The author’s tragic experiences and distrust toward the coldhearted world are incorporated into Jin-young’s life.

- Debuted with short story “Calculation” in 1955