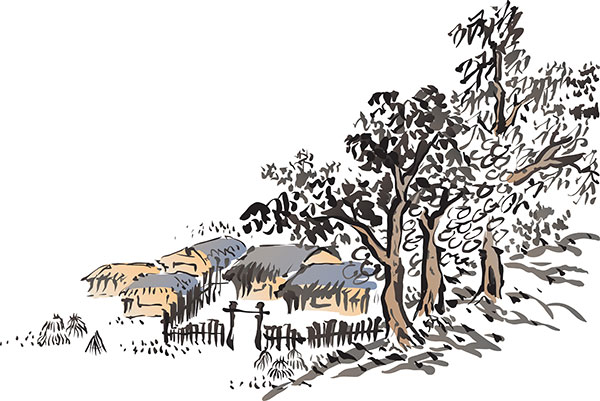 Long, long ago, there lived a boy named San in a mountain village.

San’s father died even before he was born and his mother was the only family he had. So, he helped her with house chores since he was very little.

“Mother, I’m going out to chop some firewood.”

“Okay, but don’t go too far into the woods. You might run into a tiger.”

But San happened to go farther into the mountain and ended up deep in the woods. Just when he was about to return home with firewood, a huge, ferocious tiger appeared right in front of him. 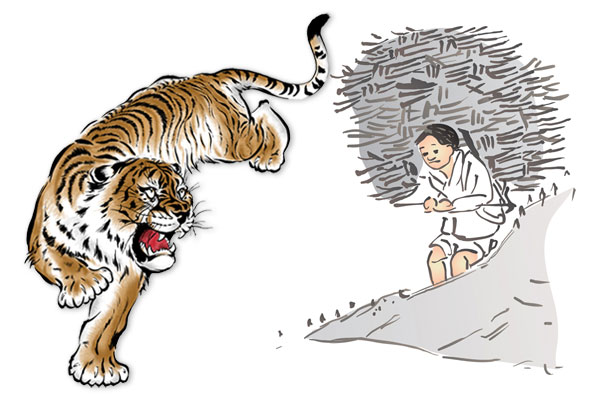 Barely keeping himself from trembling in fear, San started making up a story.

“Oh, big brother. I finally found you. Mother told me all about you. She said that I had a twin brother.”

“So, that’s what happened. I always wondered because I was the only tiger without a mother. I hope she’s doing well.”

San returned home safely, getting a ride on the tiger’s back.

The next morning, San’s mother, who went to the kitchen to make breakfast, called San urgently.

Upon closer inspection, San found a large bite mark around the boar’s neck.

“I think the tiger believed that we were his family and wanted to do something for us.”

From then on, the tiger brought animals to San’s house every once in a while. Their financial situation improved as they sold the meat and hide of animals that the tiger brought. Even San and his mother came to think of the tiger as their family.

A long time passed and San’s mother passed away. But then, San also heard the sound of a tiger wailing in the mountain for several days.

“He must have found out that Mother passed away.”

But the tiger didn’t show up at the house, not even once, after Mother died.

On the first anniversary of his mother’s death, San visited her grave to find three baby tigers, each wearing a white ribbon, crying in front of the grave.

“Father couldn’t eat or sleep after Grandmother passed away and eventually fell ill. He died a while ago.”

San brought his tiger brother’s body from underneath a big boulder and buried it next to his mother’s grave. From then on, San took good care of his tiger nephews and they lived happily ever after as a real family.