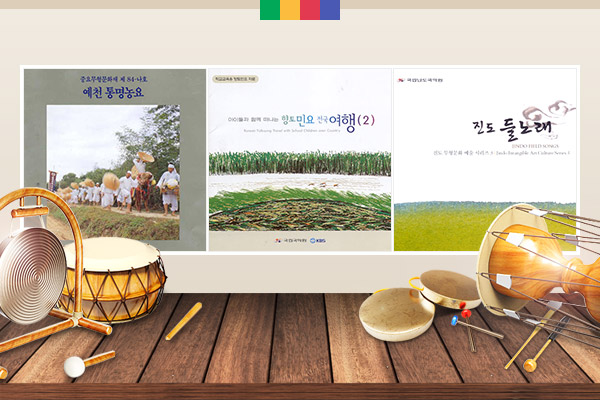 The Korean people are known to love singing. There are several ancient documents describing how Koreans sang and danced for days when celebrating rice planting and harvest. Songs also accompanied just about every house chores, such as building a house or chopping firewood or weaving. Today we’re going to listen to the songs sung while farming. The most important step in rice farming is transplanting rice seedlings. Rice grains are soaked in water to help them sprout. Then the rice sprouts are transplanted to the field. The rice seedlings have to be planted in regular intervals to make it easy for farmer to tend to the rice plants and also to allow the plants to absorb enough nutrients and sunlight. Rice transplanting was too much work for a single individual, so other farmers in a village used to help out one another. Songs were a must for such a cooperative endeavor. Here are a couple of rice farming songs from the Yecheon예천 region in Gyeongsangbuk-do경상북도 Province sung by Lee Sang-hyu.

Some of you might have expected to hear fast-paced, energetic songs for farming. But rice farming was a very exhausting work that required farmers to work long and hard for several days. It was therefore unwise to spend so much energy all at once. Farmers had to take the slow-and-steady approach to prevent themselves from collapsing from exhaustion. So the rice farming songs were sung in the same way to allow farmers to keep a steady pace. Once the rice seedling transplantation was over, the summer sun will take over to nurture the rice plants. But the problem was that the sunlight also nurtures weeds. The weeds tend to take away the nutrients from the rice plants, so farmers had to pull out the weeds. Weeding was a chore necessary to ensure a rich harvest in the fall. Next up is a song from the Chungju region in Chungcheongbuk-do Province called “Bang-a Taryeong방아타령.” This song, sung by farmers while weeding, is comprised of three movements – “Long Bang-a Taryeong,” “Middle Bang-a Taryeong” and “Jajin Bang-a Taryeong자진방아타령.” The slow-paced “Long Bang-a Taryeong” was sung from morning until lunchtime. After lunch the pace picks up with “Middle Bang-a Taryeong” and then fast and cheerful “Jajin Bang-a Taryeong” is sung when the work is about to wrap up. Here are students from Namwon Traditional Arts High School singing the weeding song from Chungcheongbuk-do Province.

Crops are said to grow by hearing the footsteps of farmers. That means the more farmers tend to the crops, the better they grow. Farmers frequent their fields to see if the fields are irrigated properly, if the crops are kept safe from pests and if the weeds are not overwhelming the rice plants. The hardest chore for the farmers was weeding, because the humid heat would emanate from the ground to suffocate farmers and leeches living in the submerged rice field would torment them while their backs strain from bending down. After about three rounds of weeding, farmers would leave it up to heaven to take care of the rest. In the old days, a village would pick the hardest-working farmer of the year, who would be paraded around the village on top of an ox with a band playing merry music. This was similar to the Korean tradition that congratulated an individual who finished first in the national examination by having him proudly paraded around his hometown on horseback. The song played during this parade is called “Gilgunak길군악” or “Gilkkoraengi길꼬랭이.” Today’s episode of Sounds of Korea will conclude with Park Dong-mae singing “Gilkkoraengi” from the Jindo region of Jeollanam-do Province.