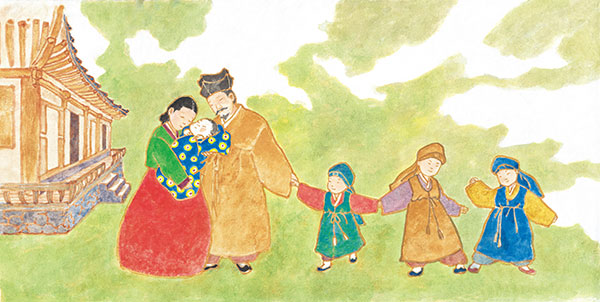 A long, long time ago, a lovely family lived in a small but beautiful village at the foot of a mountain.

Even with three wonderful boys, the couple still wanted a girl.

The parents went deep into the mountain to pray for 100 days and a year later they were blessed with a lovely girl. Everyone in the family adored the little girl.

Time flew by and the girl turned 17. 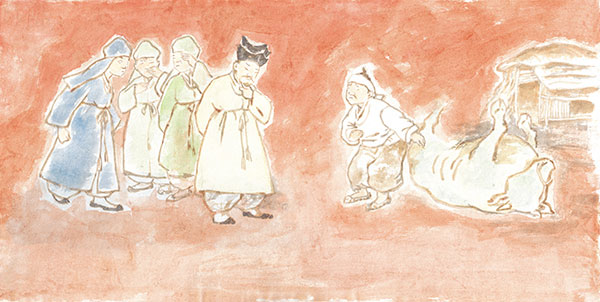 The youngest son told his father that he discovered one of the cows dead in the stable when he went to feed the animals. It was strange because the cow was not sick at all. Even more bizarre was that they found a cow dead the following day and another one the day after that. Exasperated, Father called the eldest son.

“Son, you will have to stand guard at the cowshed tonight.”

That night the oldest son went to the cowshed and hid himself in a corner. A while later, his sister came in, took out a cow’s liver, and chomped down on it.

“Your sister ate the liver of our cow? Why are you accusing her of doing such a horrible thing? Leave this house at once! I don’t need a son who tells lies about his lovely sister.”

So the youngest son was kicked out of the house.

After being kicked out of the house, the youngest son walked for days until he arrived at a village he had never seen before. There. he met a lovely girlyoung lady and got married. But every once in a while, he would heave a big sigh, which worried the wife.

After some hesitation, he finally told her why he had to leave his father’s house.

“Why don’t you go visit your family? They might need your help.”

She then went to the wardrobe, reached deep inside, and pulled out three glass bottles.

“Throw these bottles when you’re in danger.”

Arriving to his village in haste, he was greeted with a terrible shock. All he saw were empty houses littered with trash. There was not a single person to be found. Even his house looked a lot different than he remembered.

Frightened, the young man started running away through the back yard. Fearing that the sister was right behind him, the young man looked back just in time to catch his young sister transform herself into a fox and then back into being human again.

Remembering what his wife said, the young man took out the bottles and hurled them toward his sister.

Out from the white bottle came a large thornbush.

When the young man took out the blue bottle and smashed it between the two of them, they were separated by a wild raging river.

When he threw the last remaining red bottle, an explosive fire engulfed her.

Never to become a human being from eating 100 livers, the fox burned to ashes.