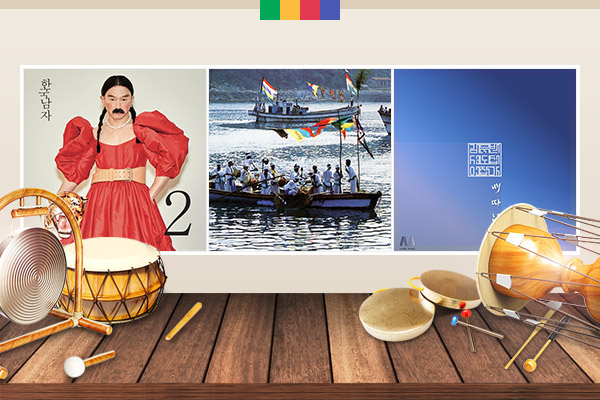 In the late Joseon period, a noble woman surnamed Song from Nonsan논산, Chungcheongnam-do충청남도 had an unforgettable experience one summer. Her brother-in-law invited the whole family to a boat ride to celebrate his appointment to a high government position. The male members of the family rode on horses while women rode palanquins to the Geumgang금강 River, drawing laypeople’s attention along the way. When they arrived at the river, several boats were waiting for them, which all carried musicians and female entertainers called gisaeng기생. It was allegedly a beautiful day with clear skies, balmy winds, lush trees and blooming flowers. Lady Song documented the boating experience in great detail and wondered if this event was a dream. Judging from Lady Song’s account of that day, boating was a luxury uncommon even for the nobility, let alone ordinary people. “Seonyuga선유가”, a folk song from the Gyeonggi region, is about such recreational boat rides. Here is Lee Hee-moon singing the song to the music by Prelude.

The song’s refrain depicts how people work the oars to sail the boat, while the rest of the song sings about the sadness of a breakup. Boating in the old days could have been enjoyed by oneself, but in most cases a boating party included one or two gisaengs to entertain the guests. A Joseon-era painting about a boat party hosted by a Pyongyang mayor features dozens of boats sailing on the river in the middle of the night. While boating was a recreational activity enjoyed mostly by people with much wealth and spare time, some boating was exhausting labor done by people who had to make a living. Fishermen who went out to the sea in their small boats sang songs to energize themselves and endure hard work. Songs about anchovy fishing were famous in the southern coastal region while those for croaker fishing were widespread in the West Sea area. Today we’ll hear a song about anchovy fishing from Geomundo Island. Designated as an intangible cultural asset of Jeollanam-do Province in 1972, Geomundo Boating Song is comprised of shorter songs about various fishing-related activities such as rope-twisting, rowing, pulling up the nets, and returning to port with a full load of fish. We’ll listen to Jeong Gyeong-yong singing the songs about rowing and pulling up the nets from Geomundo Boating Song.

Anchovies are drawn by light, so anchovy-fishing was mostly done at night with torchlights illuminating the sea. Fishermen also shouted and banged on the boat to lure the fish. The noisier it was, the more anchovies they caught. It must have been hard work, but they nonetheless would have gotten excited at the sight of a big school of anchovies. Fishermen in the old days always had to be aware of the dangers of working out on the sea, because there was no weather forecast and meeting a storm on a small boat could easily have led to death. “Baettaragi배따라기,” a folk song from the Pyeongan-do region, is about a fisherman who returned home three years after he was shipwrecked. He went first to the homes of his fellow fishermen to let them know that their loved ones died in the storm. He must have felt really guilty for being the only one to come back alive. When he went back to his own home, his aged parents begged him never to go fishing, but given that it was hard for people in the old days to change jobs, he probably would have returned to the sea. This week’s last song is “Baettaragi” sung by Kim Moo-bin.