Music inspired by the bamboo 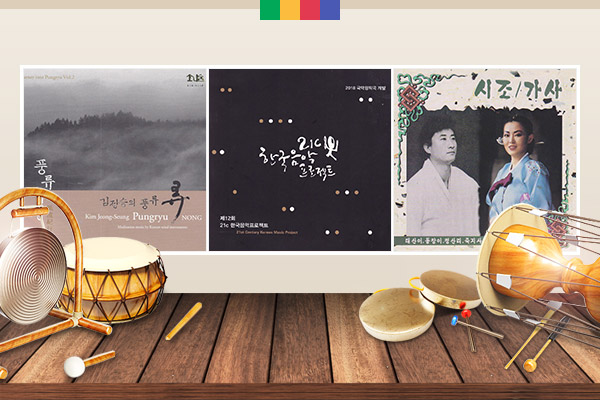 Around year 700, not long after Silla unified the three kingdoms on the Korean peninsula, King Sinmun신문 built a grand Buddhist temple called Gameunsa감은사in the east coast to commemorate his father, King Munmu문무, who led the war to unite the three kingdoms under Silla’s rule. One day an amazing thing happens in waters off this temple. An island appeared out of nowhere and there lived a bamboo tree that split into two during day and fused back to one at night. Hearing of this strange island, the king personally goes out to the shore to inspect the island and meets a dragon that tells the king that the magical bamboo tree was sent by his father, King Munmu. The mythical creature instructs the king to make a musical instrument with that tree and play that instrument to bring peace to the kingdom. The bamboo tree was made into a flute that magically repelled enemy troops, brought rain during a drought, stopped rain during a flood, and contained epidemics. The flute was named “Manpasikjeok만파식적” which means an instrument that dispels all worries. Although there is no way of knowing what Manpasikjeok actually looked like, it is believed to have resembled the daegeum대금, a large bamboo flute. Today’s first music piece is a daegeum piece titled “Sangnyeongsan상령산 Freestyle” performed by Kim Jeong-seung.

“Sangnyeongsan” is the first movement of a nine-piece collection called “Yeongsanhoisang영산회상.”  It is played slowly and calmly. Today’s “Sangnyeongsan” is a freestyle variation left to the interpretation of the musician. Daegeum or piri is often the instrument of choice for freestyle versions, because this style of playing gives musicians a chance to show off their musical skills.

Many of Korean wind instruments are made of bamboo trees. In addition to daegeum, instruments such as piri피리, sogeum소금, danso단소, and tungso퉁소 are all made of bamboo. Although these instruments are made with the same material, they make different sounds depending on the bamboo tree’s thickness or playing techniques. Bamboo trees are easy to shape into instruments because their stems are hollow inside. Bamboo is also strong given its light weight and retains its shape well. Korean gentlemen of the old called seonbi선비 admired bamboo trees for its perennial green color. Its leaves remain intact even in the winter and the sound of bamboo leaves rustling in the wind is very refreshing in the summer. Here’s Jang Myeong-seo singing “Bamboo Forest.”

Gentlemen of the old days used to call bamboo, pine trees and plum blossoms “the three friends of the cold winter,” because the bamboo and pine trees remained green even in the middle of winter and the plum blossoms flowered even in the snow. Seonbi believed that they should preserve their integrity just like the bamboo and pine trees and instill that sense of honor in this troubled world. Coming up next is a gasa가사 song called “Jukjisa죽지사.” Gasa refers to a song genre that puts a long narrative to the music of piri, haegeum or daegeum. Gasa song “Jukjisa” was inspired by the story of an ancient Chinese king and his queens. When the king died while traveling, his two wives shed tears on the bamboo trees before throwing themselves into the river. Since then, the bamboo trees growing in that region began to show red spots like bloody teardrops. “Jukjisa” was written to remember the queens’ devotion. But today’s “Jukjisa” took only the title from the Chinese rendition and instead sings of beautiful sights and interesting customs. The first part goes, “The skies and earth do not age and the moon always rises. A hundred years have already passed in this lonely world.” Let’s enjoy Lee Dong-kyu singing “Jukjisa.”