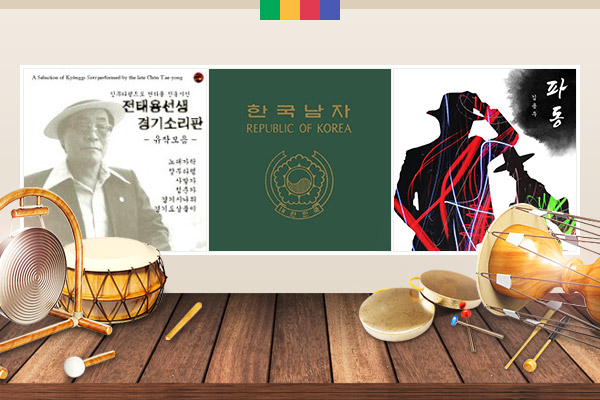 There are many multitalented players in Korean traditional music, meaning musicians who sing and dance as well as they play instruments. Sometimes such musicians enjoy more fame outside of their specialty areas and master musician Jeon Tae-yong전태용 is such a talent. He was born in the early 1920s in Yeongjong영종, Gyeonggi-do Province and started studying music at 15. He was known as the master of shaman music and a haegeum virtuoso. But he filled in for other musicians from time to time, playing the piri or the daegeum or even the gong. He was a true all-around player, but he was best known for “Changbutaryeong.” He had never sung out in public so not that many people knew that he could sing so well. At the end of a shaman ritual, all the participants used to sing and have a good time. Someone asked Jeon Tae-yong to sing and “Changbutaryeong” was the song he picked. Everyone was amazed by his singing voice and he eventually released a record of the songs he had sung privately, which ended up making him famous as the master singer of “Changbutaryeong.” Let’s take a listen to that song.

In the old days an entire village would often enjoy a party, such as a birthday celebration for a village elder or a wedding or even a funeral. Every villager took part in such occasions because it was a community affair. It was common for people to help out in the neighbor’s kitchen and share party foods. When men, especially the older people, got drunk, they would sing and dance to let out their joy. They probably didn’t sing that well, being drunk amateurs, but they must have relished the experience and had plenty of fun. That was the charm of “Changbutaryeong” specialized by Jeon Tae-yong. “Changbutaryeon” was one of the signature folk songs of Gyeonggi-do Province. It was performed during a shaman ritual in the Seoul and Gyeonggi region to win favor of Changbu God. The term “changbu” refers to male musicians who play for a shaman priestess in a shamanistic ritual. Changbu God is an ancestral god worshipped by these male musicians. Perhaps it’s only right that Jeon Tae-yong, who used to work as a changbu, sang “Changbutaryeong” so well. The song that was performed only at shamanistic rituals was rearranged for public performance by professional singers and that is Gyeonggi folk song “Changbutaryeong” preserved to this day. Now let’s listen to the jazz version of “Changbutaryeong” sung by Lee Hee-moon to the accompaniment of fusion gugak quartet Prelude.

The last version of “Changbutaryeong” is a little special. A poem titled “Ipsanga입산가,” written by Buddhist monk Gyeongheo경허, is set to the tune of “Changbutaryeong.” Monk Gyeongheo is one of the greatest Buddhist monks in the late Joseon period. He joined the Buddhist priesthood when he was only nine years old. One year he was on his way to see his mentor in Hanyang, today’s Seoul, when he encountered a storm. He couldn’t ask any of the houses to let him stay because an infectious disease was surging at the time. So he spent the night under a big tree, shivering in the cold. But he came to realize that life and death were not that different and studied really hard to gain real enlightenment. His poem, “Ipsanga,” can be translated roughly as below.

Everything in this world is nothing but a dream.

I walk deep into the mountain to realize this important teaching.

I hear the gentle sounds of birds and water

And the grape and gooseberry vines coil up a tall pine tree.

And invite a good friend to recite a poem and light incense from time to time.

Monk Gyeongheo must have liked “Changbutaryeong” a lot to put his poem as lyrics on this tune. Let’s listen o Kim Yong-woo singing “Ipsanga.”