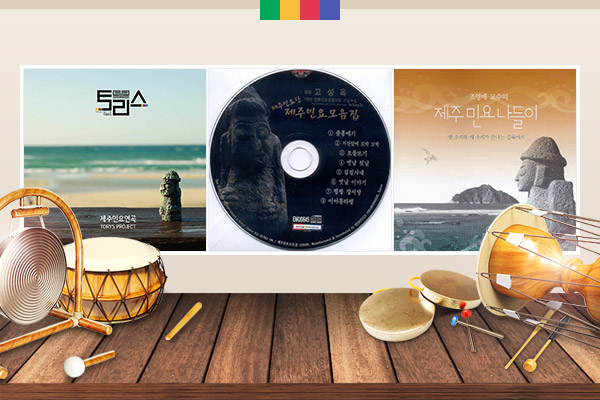 Jeju is the largest island in Korea with its distinct geological features, flora and fauna and even dialect and customs. When Jeju natives speak in Jeju dialect, it sounds like they’re speaking a foreign language, totally incomprehensible to people outside of Jeju. Songs of Jeju differ just as widely as the language. There is an old Korean saying that goes, “A tangerine turns into an orange once it crosses a river,” which implies that a change in the environment results in a change in characters. Even though many of Jeju folk songs had originated from mainland, the songs underwent transformation in their lyrics and tunes over time in accordance with Jeju’s natural environment and people’s intonations. The first song in today’s episode is an a cappella version of three Jeju folk songs – Iyahong Taryeong이야홍타령, Seowuje Sori서우제소리 and Neoyeongnayeong너영나영 – sung by Torys.

“Iyahong Taryeong” and “Yeoyeongnayeong,” which sing of the island’s beautiful scenery, were said to have been influenced by the groups of actors travelling in the mainland. And “Seowuje Sori” was originally a song performed during shaman rituals. People’s faith in folk religion was very strong on Jejudo Island because of frequent typhoons and isolated location. A shaman ritual would be held for as long as 15 days, the duration and importance of which resulted in a wide variety of songs. Oftentimes, the songs sung during the shaman rituals would be sung while entertaining or working, turning religious songs into folk songs. “Seowuje Sori” is one example of such conversion. Now we have a song Jeju natives used to sing while working. It’s titled “Geomjilsadae검질사대,” usually sung while weeding the fields. Weeding is a hard work, especially on hot summer days. People working out at the field would sweat buckets from the sizzling sun and radiating ground heat. What made such drudgery bearable was your neighbors and fellow laborers who worked right alongside you. The weeding song was what made you realize that you have someone you can rely on and who shares your hardship. “Geomjilsadae” will be followed by “Grass-cutting Song,” which was sung while cutting grass or hay for cattle and horses. Cattle and horses were important livestock for people of Jeju, so cutting grass to feed the animals during winter was an important chore for Jeju farmers. In autumn people would walk up to the middle of the mountain where grassy meadows were situated and cut down the grass for the animals.

As an increasing number of foreigners tune into Korean dramas these days, Korean traditional items such as gat갓, a traditional men’s hat, have become available on overseas shopping sites. Frankly, the gat is not a practical headwear. It isn’t waterproof so it doesn’t keep your hair dry from the rain nor does it protect you from cold or heat. The only function of gat is showing the wearer’s social status, since only learned gentlemen or noblemen could afford or were allowed to wear them. Perhaps gat had an aesthetic function as well, giving the wearer a mysterious vibe by providing only a partial glimpse of him through the mesh brim. The edge of the brim was made with thin bamboo strips and the cylindrical top part with horsehair. Since Jejudo Island was famous for its horses, Jeju women were busy making gat and other men’s headwear with the hair from Jeju horses. Just imagine how tedious and exhausting it must have been for them to weave and twist thousands of thin hair strands to make one gat. It was only natural that they were comforted and energized by the hat-weaving song. Here’s Park Jin-ah singing “Hat-weaving Song.”