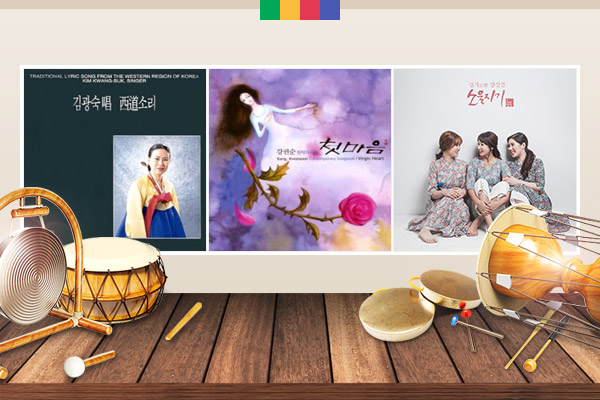 A good song is a series of words that is sung in a way that plays up the meaning of those words. There are several Korean music genres in which poems are set to music. For instance, there are gagok가곡 and sijochang시조창, which refer to Korean sijo poems set to melodies. Then there is gasa가사, which are songs based on poems that are longer than sijo and don’t follow a fixed form. Also, sichang시창 refers to songs derived from Chinese poems. Today’s first piece is a sichang song titled “Gwansanyungma관산융마.” This poem was written in the late Joseon period by a scholar named Shin Gwang-su신광수, who submitted it for the government exam. The poem starts off like, “The autumn river is quiet, and the fish are cold. There is a lone man standing on a gazebo facing the westerly winds.” The poet was inspired to write this patriotic poem by Chinese poet Du Fu’s poem that lamented his war-ravaged country. Perhaps because of the poem’s sentimental beginning, it soon grew popular among the gisaengs기생 or female entertainers of Pyongyang. Here’s Kim Kwang-suk singing “Gwansanyungma.”

“Gwansanyungma” skillfully describes the melancholic feeling of autumn. But that may not be so evident to people who are not familiar with Korean traditional music. Since the song is sung in a very slow and drawn-out manner, people used to faster-paced songs or rap music of today may find it frustrating to listen to. Furthermore, even the words are hard to understand since the lyrics are based on a Chinese poem. Such drawbacks prompted today’s young musicians to put modern poems to contemporary music while maintaining the traditional singing method. This way, the younger generation can be introduced easily to traditional music. Coming up next are two such songs – first one is titled “At Seonwunsa선운사 Temple” and “A Name I Miss.” The poem “At Seonwunsa Temple” begins as thus.

It takes a flower long to bloom but only an instant to wilt.

It took only an instant, too fleeting

even to take a closer look or think of a loved one.

And the second poem “A Name I Long For” written by Yong Hye-in is roughly translated as follows.

How happy would I be if I had a name I miss kept deep in my heart?

It would come to me if I close my eyes

And I want to embrace it with my racing heart

But my heart is filled only with longing.

These two poems will be sung with piano accompaniment. The first one will be sung by Kang Kwon-sun and the other by Kim Na-ri.

Two modern poems were sung to piano in the singing method of jeongga정가. Jeongga is one of the hardest traditional music genre to preserve. As mentioned earlier, people used to rap or fast pop songs are understandably intolerant toward snail-paced gagok or sijo. Even if people attempt to understand this genre, it’s too much work because they have to study Chinese characters and cultures as well. But let’s say that a handful of students studied jeongga, they often found it hard to make a career out of it because there wasn’t that many opportunities for jeongga singers out there. These days, however, many musicians try to overcome such difficulties by taking new approaches, like singing modern poems in ways that are more familiar to younger audiences or translating Chinese poems into modern Korean. The last piece for today’s episode is titled “Tamchun탐춘,” based on an ancient Chinese poem. It begins with these lines.

I looked for the spring all days long, but I couldn’t find the spring.