Songs of the Gyeonggi-do Region 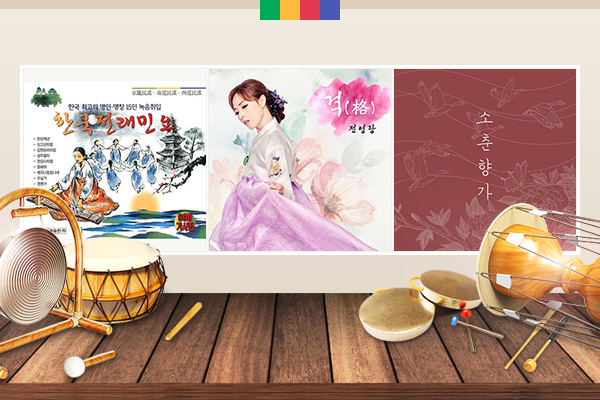 Many of Korean heritages originated from China and other countries. For instance, Chinese characters and Confucianism were introduced from China, Buddhism from India, taepyeongso태평소 and haegeum해금 from central Asia. Given these imports, Korean culture can be easily misunderstood as just derivatives or copies of other cultures, but cultures tend to influence one another mutually, not in a unilateral way. In fact, there are records in China that say the Chinese played music from Goguryeo고구려 and Baekje백제. Cultural exchanges take place not only between countries but also between different regions within a country. Today we’ll take a look at Gyeonggi songs influenced by other genres or regions. The first such song is “Daegamnori대감놀이,” a shaman ritual that used to be performed in Seoul and Gyeonggi-do areas. In shamanism, Daegamsin대감신 is a god that oversees peace and prosperity of a household. It’s not a single god, but a collection of deities that exists wherever we need them to be. Daegamnori is performed to please these gods with songs and dance, who then bring wealth and good fortune to those participating in the ritual. Here’s Ji Yeon-hwa singing “Daegamnori.”

Traditional singer Ji Yeon-hwa was so good at singing “Daegamnori” and other songs for shaman ceremonies that she was sometimes mistaken for a real shaman priestess. Although she was not a shaman priestess, her father Ji Gap-seong지갑성 was a famous shaman musician and her mother actually performed Korean shaman ritual of gut굿, so she must have been familiar with shaman music since young. Coming up next is “Hoisimgok회심곡,” which has to do with Buddhist ceremonies. Buddhist scriptures are usually in Chinese or in ancient Indian, making it hard for laypeople to understand. So, Buddhist monks would translate these scriptures into Korean and put them to the Korean folk melodies. This song called hwacheong화청 was much easier to understand than the songs in ancient Indian. But still easier was “Hoisimgok” which was a more popular version of hwacheong adapted by the singers of Gyeonggi-do folksongs. “Hoisimgok” has almost no difficult Buddhist terms and simply tells people to love their parents and siblings, be generous to others and live a virtuous life if they want to pass the judgment of ten kings of the netherworld and be allowed into heaven. Here’s Jeon Young-rang singing “Hoisimgok.”

“Hoisimgok” is usually sung with the singer playing the gong, but today’s rendition was sung with piano accompaniment. There are many Gyeonggi songs that were influenced by religion, but some were shaped by pansori generally known as the songs from the southern region. Twelve iconic Gyeonggi japga잡가 are sung by professional singers. Eight of those songs feature pansori “Chunhyangga춘향가,” “Heungboga흥보가,” and “Jeokbyeokga적벽가,” with six of them are about “Chunhyangga” alone. “Sochunhyangga소춘향가” is a song about the first encounter between Chunhyang and Lee Mong-ryong이몽룡. “Chulinga출인가” and “Bangmulga방물가” are about the parting of the two lovers, while “Jipjangga집장가,” “Hyeongjangga형장가,” and “Sipjangga십장가” were about Chunhyang being punished after refusing to attend to the town magistrate at night. Today we’ll listen to “Sochunhyangga,” in which Chunhyang tells Mong-ryong how to find her house. She describes the features of her house and its surroundings, such as “bamboo trees were used to make fences and pine trees a gazebo.” The song is usually accompanied by the janggu장구, Korea’s double-ended drum, but today’s version is sung by jeongga정가 singer Ahn Jung-ah and accompanied by Won Na-gyeong’s haegeum.