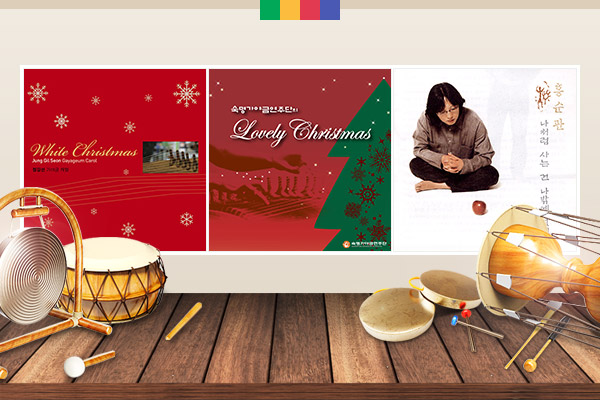 Children look forward to Christmas for all the gifts they are bound to get. They wait for Santa Claus to reward them with Christmas presents for their good behavior throughout the year. Sometimes they wonder how Santa Claus would come inside their houses and leave presents in small stockings. One Christmas carol favorite among Korean children must be “Rudolph the Red-nosed Reindeer.” Rudolph was a member of a reindeer family but was ostracized for having a shiny red nose, setting himself apart from other reindeer. Being snubbed in a herd is a fatal weakness, but Santa gives Rudolph a chance to steer his sled and have a special place in the herd. Once this honor is bestowed on the former outcast, Rudolph becomes a beloved member of the team. In this song, Santa shows what true love is – looking past someone’s shortcomings and finding a way to turn it into a strength. Here’s gayageum virtuoso Jung Gil-seon’s performance of “Rudolph the Red-nosed Reindeer.”

A lot happens on the night Christmas, perhaps because Christmas is so near dongji동지, the winter solstice. Today is dongji in Korea, the day of the longest night, and starting tomorrow, the night will gradually become shorter. In the ancient times, dongji was regarded as the first day of a new year and even called a “small Seol” or “small New Year’s Day.” There is a Korean proverb that says you are one year older only when you eat red bean porridge on dongji. According to the ancient theory of yin-yang and the five elements, red is the color of yang or positive energy while spirits represented ying, the negative energy. So people believed that red beans had the power to ward off evil spirits and prevent bad luck. On dongji, when the negative energy is at its strongest, people cook porridge out of red beans full of positive energy to chase away bad spirits and bring good fortune. There is an old Korean saying that goes “Even the vegetables are renewed after dongji.” Perhaps it is not a coincidence that Jesus was born so near dongji. The fact that Christmas and dongji are so close to each other may be interpreted as God’s way of telling us to live our lives with renewed energy and resolution. Now we’re going to hear three songs about Christmas and winter nights. The first one is “Silent Night, Holy Night” performed by the Sookmyung Gayageum Orchestra, followed by “Snow Is Falling,” an adaptation of southern folk song “Snowman,” sung by Jeong Sang-hee and her daughter Yoo Chae-ryeong, and lastly “Jingle Bell Rock” by L’Art pour L’Art.

The last song in today’s episode is “Kumbaya.” The word “kumbaya” is believed to be pidgin English derived from the phrase “come by here.” After Europeans discovered the American continent, they settled in the new land and brought slaves from Africa to farm their vast plantations. African slaves worked all week long and had to escort their masters to church on Sundays. They had to wait outside as they were not allowed inside the church with their masters. The sound of the hymn “Kumbaya My Lord” must have comforted them as they waited outside for the service to end. The hymn has a simple tune yet it moves the heart of anyone who listens to it. So it wasn’t surprising that the song quickly became popular among African slaves. They probably sang the song while longing for someone to lend them a helping hand. Let us listen to the song with a hopeful heart that anyone in need may get the help they seek. Today Hong Soon-kwan will sing “Kumbaya” to the haegeum accompaniment of Kang Eun-ill.