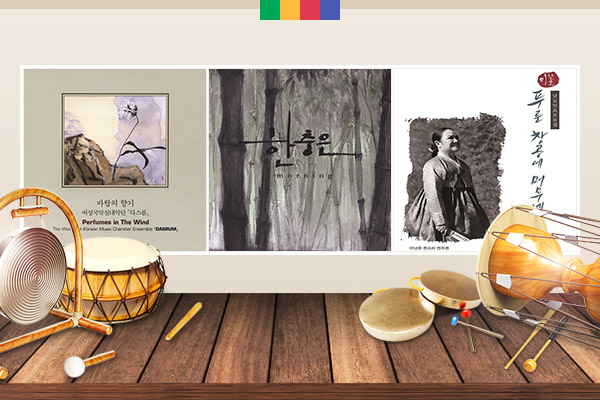 The bed has been cold for a while.

Now I see that the morning has come.

It had snowed much last night,

Judging from the sound of the bamboo branches breaking now and then.

In the old days indoor heating was done by firing up the kitchen furnace or keeping a brazier in the room. But the biggest drawback of such a heating method is that fire tends to go out overnight, leaving the room chilly by morning. So people usually woke up when they felt the cold air seeping under their blankets. Similarly, the poet probably woke up in the cold room and saw the morning light outside. He opened the window to see the whole world covered in white powder and to hear the sound of bamboo branches breaking under the weight of snow. What would you like to do in such a morning? Make a snowman or a snow angel? Or sweep the yard lest you should slip and fall? Think about it while you listen to Dasrum, an all-female gugak chamber orchestra, performing “Scene of a Winter Morning.”

Scene of a Winter Morning / Performed by Dasrum

The high and clear sound of the sogeum소금 seems to describe the cold winter morning perfectly while the sound of the guitar adds a warming touch. It appears that winters in the old days were much colder than in recent years. The layout of traditional Korean homes allows for the winds to pass through the yard rapidly. Also, window made panes of hanji, Korean traditional paper, and ill-fitting door frames let in an incredible amount of draft, and thickly padded outerwear was unthinkable back then. Nonetheless, children still found fun and excitement in winter. Their favorite winter pastime included playing marbles with fingers frozen stiff from the cold, flying kites on the windy hilltop, and sledding or skating on the frozen rice fields. Grownups had a more difficult time in winter, especially women who had to do the wash in freezing water without rubber gloves. Recently washed clothes would freeze solid when hung out to dry in the yard, which then had to be brought inside to be thawed. It would have been unbearably cold but now that we think about it, we can’t help but grow a bit nostalgic at the memories of delicious sweet potatoes and chestnuts roasting in the brazie, and the blinding winter snowscape. Next up is “Snow,” a daegeum piece played by Han Chung-eun.

There is a flower that blooms in the middle of winter – the red camellia. The blood red flower petals surrounding the bright yellow stamen and dark green leaves blanketed with white snow is a sight to behold. Camellias look beautiful when in full bloom, but their beauty does not diminish as they die because the flowers drop to the ground whole, carpeting the ground with full blossoms. The camellia oil produced from camellia seeds was used by women in the old days to keep their hair in place. The oil also had skin moisturizing and scalp calming qualities, making it a perfect massaging and haircare product. It appears that Koreans of old were very wise to have found so many uses for the camellia oil. The last song we have for you today is “Dongbaek Taryeong” or “Camellia Song” from the southern region. It starts with the words, “Women collect clams from the sea far away and big girls pick camellias from the fields.” The song continues on to sing how people used to light lamps with the oil made from those camellias and make wedding dresses for the girls. Here is Lee Nan-cho singing “Dongbaek Taryeong.”