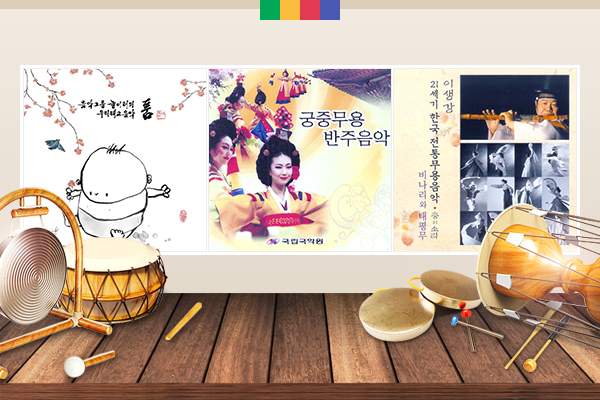 Elementary schools in Korea used to hold a fall sports competition. In the old days, the school sports day meant a celebration for the entire village. Students are divided into two sides, usually the white team and the blue team, and compete in several events, such as a 100-meter sprint, tug-of-war, and bean bag toss. The sports day was usually held when fall harvest was over, so grownups who are done with the year’s farming joined the young children in enjoying the festival. Their excuse was to cheer on their children or grandchildren, but sometimes they became a legitimate part of the sports festival by taking part in tug-of-war or a relay. The sports day also included group dance or acrobatics. One favorite dance routine was the kkokdugaksi꼭두각시 dance. Children in first or second grades would dress up in colorful Korean outfits and pretend to be young grooms and brides in this traditional dance. Their parents would delight in this adorable performance. The first piece for this week’s Sounds of Korea is “Yeonjigonji,” an arrangement of the musical accompaniment to the kkokdugaksi dance, performed by Noriter.

For those unfamiliar with the word “kkodugaksi,” it’s the name of a puppet play. Strings are attached to a puppet’s arms and legs with which a puppeteer controls the wooden doll. The kkokdugaksi dance performed by children on a sports day earned that moniker because the children’s dance movements must have been awkward yet adorable.

Now comes the musical accompaniment for court dance piece “Chunaengjeon춘앵전.” This piece was choreographed by Crown Prince Hyomyeong효명 in the eighteenth century. The crown prince, the son of King Sunjo순조, was reportedly quite bright and very loving toward his parents and siblings. At the age of eighteen, he started administering state affairs as regent in the stead of his father when a few politically powerful families held actual power over the nation. Crown Prince Hyomyeong believed that court music and dance was a way to bring harmony among the court officials while retaining the dignity of the monarchy. It could have been called culture-based governance. The crown prince composed the songs and dance routines for the parties held in honor of the king and queen. One such pieces was “Chunaengjeon,” a portrayal of nightingales dancing through the willow trees on a spring day. It’s a solo dance in which a dancer is dressed in a yellow gown like a nightingale with a sash in the color resembling fresh willow leaves, and dances on top of a small but colorful rug. Let’s imagine a lone dancer moving gracefully as we listen to the musical accompaniment to this elegance dance.

While court dance follows strict rules and features splendid costumes and elegant movements, folk dances performed among ordinary people are generally more expressive. Also, there are dance pieces, like Buddhist dance, that emphasize restrained gentility. Buddhist dance is not performed by Buddhist monks, but by professional dancers who are dressed in Buddhist monk robes with long, wide sleeves and wearing a conical hat. At the start of the dance, the dancer is prone on the floor and then slowly stands up with her hands together. It is impressive to see the movements made in silence, how the long sleeves billow in the air in graceful arcs. The music stops at the end and the dancer beats the drum, which expresses the joy of severing all the earthly emotions and reaching the state of nirvana. Buddhist dance was designated a national intangible cultural property in 1969. Today’s last piece is the musical accompaniment to the very basic version of Buddhist dance performed by daegeum대금 virtuoso Yi Saeng-gang.