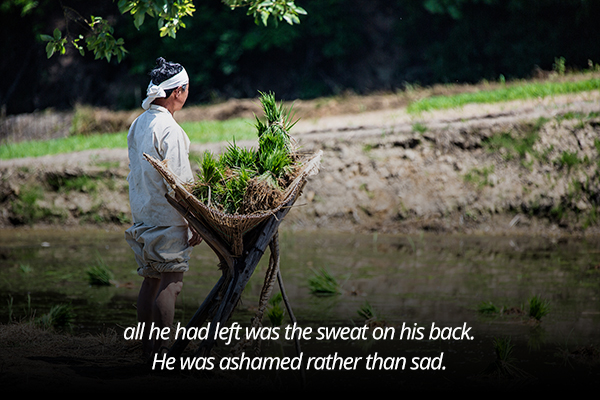 After making their escape, Eung-chil’s family lived by begging on the streets. When even that became difficult, they went their separate ways to find a way to somehow survive.

Having nowhere to put down his roots, Eung-chil ended up as a career criminal who had been convicted four times for theft and gambling. Having no family, no home and no land, Eung-chil drifted into the village where his younger brother, Eung-oh, lived.

They were glad to see each other, being the only family left, but Eung-oh’s situation wasn’t any better than the older brother’s.

Eung-oh was an honest farmer. At age thirty-one, he was considered by other villagers as an exemplary young man. But the problem was that he didn’t harvest the rice plants. The landowner or Official Kim who lent him money on a long-term interest often urged him to reap the rice.

“What good is the rice when my wife is about to die?”

Eung-oh’s wife was ill and he couldn’t buy her medicine because he couldn’t afford it, which was all the more reason he should have harvested the rice. But why didn’t he?

Anyone who had threshed the landowner’s crops with Eung-oh last year wouldn’t have asked that question. He would have been happy to harvest the rice he tended lovingly for the entire year. But after giving the land fee to the landowner, paying the interest with rice, and settling the fertilizer payment, all he had left was the sweat on his back. He was ashamed rather than sad. It was really humiliating for him to go home with an empty cart rattling while his friends who had farmed with him watched him go emptyhanded. He held back the tears until he couldn’t any longer.

Farmers couldn’t find any hope in farming within the harsh relationship between tenant farmers and landowners under the Japanese colonial regime. Sometimes farmers sought a big fortune by indulging in illegal gambling. In that sense, both Eung-chil and Eung-oh are manmubangs만무방, scoundrels. Not only those brothers, but all Korean farmers at the time were considered manmubangs who lived from day to day with no hope for the future.

He struck his own brother out of anger but seeing his bruised arms, he came to feel uneasy.

“This is what an unlucky man gets in life,” Eung-chil spat on the ground.

He picked up Eung-oh and carried him on his back.

“When will he grow up?” Eung-chil thought as he heaved a big, worried sigh. Then he sauntered down the hill in silence.