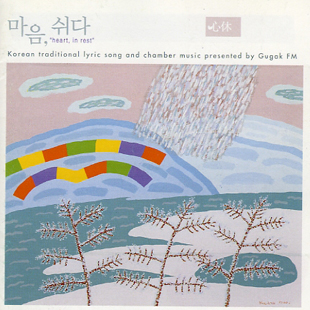 Kim Hong-do is known as one of the greatest masters of folk painting. His masterpiece titled “Seodang서당,” a Joseon era school, features a child in tears after being scolded by his teacher and his fellow students who make fun of him. It also features the teacher who appears somewhat sorry for having punished the young boy. Their expressions are so real and alive that you feel as if you are right there in the classroom, among the students. There is also a painting of a wrestling match in which the tension of two wrestlers fighting for victory is well portrayed. There is even a young boy selling candies to the spectators, seemingly uninterested in the outcome of the match. Kim also painted “Mudong” or “A Dancing Child,” which depicts a young dancer, whose sleeves seem to billow with the music played by a traditional band. All these paintings were done in such a distinctive style that anyone can see the signature strokes of Kim Hong-do. But folk painting was not the only area in which Kim stood out. He was very skillful in drawing Buddha, godly beings, and Confucian scholars, and surprisingly quite knowledgeable in music as well. Today we’ll take a deeper look at Kim Hong-do’s ties to music.

That was Yeombul Taryeong performed by a group of master musicians, including Park Yong-ho at the daegeum, Kim Yeong-jae at the haegeum and Kim Dong-won at the drum. Kim Hong-do was born to a middle-class family in 1745, during King Yeongjo’s reign. At age seven he started learning art from Kang Se-hwang강세황, a respected scholar, painter, and critic. It was Kang who recommended his star pupil to dohwaseo도화서, a government agency in charge of royal paintings and artworks. Only the most talented painter of dohwaseo can paint “eojin어진,” a portrait of a king, and Kim Hong-do only in his twenties, was brilliant enough to have painted the portraits of King Yeongjo and then-Crown Prince, who would later become King Jeongjo. He was also applauded for his character. There is a record describing him as “a person of beauty and a generous heart, who is not concerned about trivial matters, so people called him a shinseon신선, or a godly being.” Another document said that Kim had “a clear countenance and a pure spirit” and that “people could tell that he was extraordinary just from his grace and view of the world.” The fact that he was particularly knowledgeable about music can be learned from his paintings. In his 1784 masterpiece “Danwon-do” or the “Painting of Danwon,” the artist himself is seen enjoying music with his friends. In the painting Kim is the one playing the geomungo.

That was a piece called Yeongsan Hoisang performed by Lee Se-hwan at the geomungo and Hwang Gyu-il at the daegum. This performance could have been what the music sounded like with Kim Hong-do plucking at the geomungo strings. He is also known to have painted a self-portrait. Kim’s work, titled “A Man in Hemp Clothes Enjoying Music” shows a man dressed in a simple hemp outfit playing a harp-like instrument with a reed mouth organ in front of him. Beside these instruments symbolizing a scholar, there is a sword representing a man’s integrity, as well as paper, a potted plant, and a wine bottle, all indicative of a scholar who has left the worries of the secular world behind and is living a simple yet noble and artistically satisfying life. Kim Hong-do is also known to have been good at the tungso, a Korean pipe. Kim certainly was a master of both painting and music, and a lover of all art forms. Let’s wrap up this episode of Sounds of Korea with Yeongsan Hoisan played by danso master Kim Jung-seop.