Songs from other countries 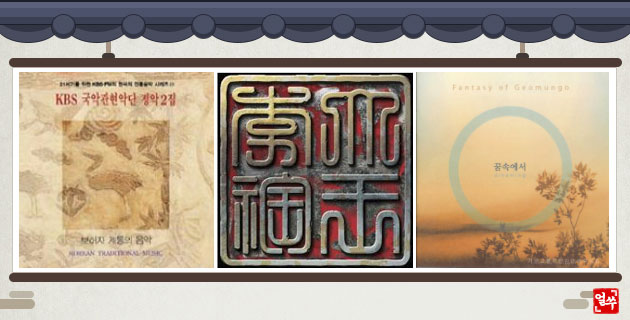 It’s easy to think of traditional Korean culture as something that was born and passed down only in Korea. But culture is something that evolves and endlessly changes by merging with other cultures. The same applies to musical instruments. The traditional woodwind instrument taepyeongso (태평소) originally came from central Asia, and a string instrument called a haegeum (해금) used to be played by the nomads in the north. Buddhist music beompae (범패) originated in India, the birthplace of Buddhism. What’s more, there is always a lion dance included in the Korean mask dance repertoire even though lions did not live on the Korean Peninsula, indicating that the traditional Korean mask dance was influenced by the cultures of faraway regions as well. Even among royal court music, there are two pieces that were supposedly adapted from China’s Song Dynasty during the Goryeo period. Those two pieces are “Boheoja (보허자)” and “Nakyangchun (낙양춘).” These works changed a lot over the last 1,000 years, but an aura of their exotic origin remains, rendering the music a bit different from other Korean royal music pieces. The two songs used to have lyrics, but they are now played only with melodies. Let’s listen to “Boheoja” performed by the National Gugak Center’s Court Music Orchestra.
Music 1: Boheoja/ Performed by the National Gugak Center’s Court Music Orchestra
“Boheoja” means walking on air, which is why music historians assume that it’s somehow related to Taoism. Its lyrics, which are partially preserved to this day, contain a prayer for the country’s prosperity and peace. The following is a rough translation of the lyrics originally written in Chinese characters.

As the gate of the sky opens, the sea becomes red,
And auspicious air rises from the jade axe in the red sand.
As the music of heaven is played in praise of the beauty of the sky,
The golden phoenix and silver goose fly off
And fragrant orchids dance to the waves.
Oh, slender willow leaves, calm winds.

When spring arrives at the heart of the palace, a celebration of heavenly peaches is held.
The silk dresses dance like flower petals.
Bows twice and makes three wishes.
The first wish is for a long, healthy life for the king
The second is for transparency and comfort for the royal court and the people
The third is for the music of heaven to echo over the entire land.

Listening to this slow and peaceful music while enjoying a glass of wine would make anyone relax and live a long and healthy life. Now let’s listen to the modern rendition of “Boheoja” performed by E-Do.
Music 2: “Boheoja”/ Performed by E-Do
MC: Another piece of court music that was imported from China was “Nakyangchun,” meaning the spring of Nakyang. Its lyrics are more expressive than those of “Boheoja.” The words are said to have been written by Chinese statesman and scholar Ouyang Xiu of the Song Dynasty. A rough translation is as follows.

It is not yet light outside the window, and the nightingale sings.
The incense stick in the burner has all been burned.
The silk screen and curtain have blocked the spring chill
But the rain has come overnight.

I rest against the embroidered curtains with cottony willow seeds blowing in the wind, making me frown and my heart wander.
After picking flowers and wiping off my tears, I ask a big goose
Whether it has seen my beloved at the place where it had left.

The lyrics describe how a woman pines for her husband. The feelings of longing seem to be the same regardless of the time. For the last piece on today’s Sounds of Korea, we have prepared an adaptation of “Nakyangchun” played with a geomungo and a flute, with Oh Kyung-ja on the geomungo and Cho Yun-young on the flute.
Music 3: Nakyangchun/ Geomungo by Oh Kyung-ja, flute by Cho Yun-young
Share
Print
List