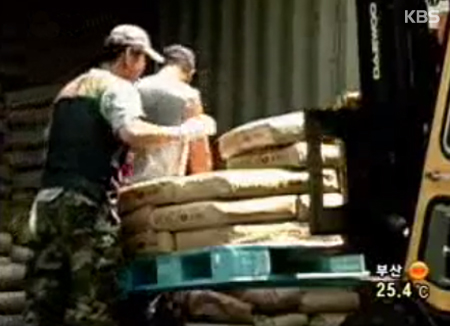 When there are news reports about flood damage in North Korea, individuals and groups in South Korea engage in various activities to help out victims in the North. The two Koreas have been willing to provide aid to their brothers and sisters on the other side of the border who have been hit by natural disasters. It was in the 1980s when flood relief aid between the two sides began. Today, we’ll look back on North Korea’s aid for flood recovery in South Korea in 1984.

I’m 85 years old. 34 years ago, in 1984, I was in charge of relief and volunteering activities at the South Korean Red Cross. In September that year, Gyeonggi Province, Seoul and Chungcheong Province in South Korea suffered from severe flood. Unfortunately, the flood caused nearly 200 casualties and inundated thousands of houses, with tens of thousands of people left homeless. On August 20, before the flood broke out, then-South Korean President Chun Doo-hwan stressed the need for economic exchanges and cooperation between South and North Korea, saying that Seoul is willing to provide North Korea with goods and technologies to help improve people’s lives in the North. That reflected that Seoul’s North Korea policy was starting to change. It so happened that South Korea was soon hit by a big flood. Only a few days later, North Korea proposed to send relief goods to flood victims in South Korea. Pyongyang notified Seoul of its decision to send 7,300 tons of rice, 500-thousand meters of fabric, 100-thousand tons of cement and medicines.

This is Choi Eun-beom, a doctor of law, who led the relief and volunteering activities of the South Korean Red Cross in 1984. Torrential downpours that lasted for four days from August 31, 1984, flooded some neighborhoods in Seoul, leaving 189 people nationwide dead or missing. Hearing the news about the worst flood in South Korea, North Korea offered relief aid to the South through broadcasts on September 8. As a matter of fact, North Korea had expressed its intention to provide relief goods to the South before. When South Korea was badly damaged by torrential rains or typhoons in the 1950s and the ‘60s, the North proposed to extend a helping hand to victims in the South. However, South Korea rejected the offer every time, suspecting that Pyongyang had some political purposes behind its proposal. But the situation was different in 1984. Seoul, in fact, still had hard feelings toward Pyongyang because of the 1983 terrorist bombing by North Korea in Myanmar, which was known as Burma at the time. But it was important to create a peaceful atmosphere on the Korean Peninsula ahead of South Korea’s hosting of the Asian Games in 1986 and the Seoul Olympics in 1988. That’s why the Chun Doo-hwan government in South Korea underlined the need for exchanges and cooperation with North Korea. It accepted Pyongyang’s offer to provide flood relief aid, and the Red Cross in the two Koreas began to hold discussions. Here again is Dr. Choi.

From September 14 to 19, 1984, the Red Cross in the two Koreas held working-level talks in the conference room of the Neutral Nations Supervisory Commission at the truce village of Panmunjom. I was one of the South Korean delegates. The two sides discussed how South Korea would receive the relief goods and distribute them. The discussion was not smooth, with both sides arguing about some details. After all, South Korea agreed to receive cement via Incheon Port on the west coast and Bukpyeong Port on the east coast, and to accept rice, fabric and medicines through Panmunjom. I went to Bukpyeong Port to take delivery of cement that had been carried by four North Korean vessels. I think that was the first exchange of goods between South and North Korea.

From September 29 to October 4, North Korea’s rice, fabric and medicines arrived in South Korea through Panmunjom, while cement entered the South through Incheon Port and Bukpyeong Port, which is now Donghae Port in Gangwon Province. 1,373 North Korean people, including 85 reporters, also set foot on South Korean soil to deliver the relief supplies. The emergency relief goods from North Korea became the talk of the town in South Korea. Let’s hear again from Dr. Choi.

Rice, among other relief supplies, drew special attention in South Korea. Some people made rice cakes from the North Korean rice, which wasn’t very good in quality. But many people who had left their North Korean hometowns long ago, like Dr. Choi, served the rice from the North at the ancestral memorial service on the Chuseok holiday and shed tears. In response to North Korea’s humanitarian aid, South Korea presented gift bags that contained 18 items each, including a blanket, a wrist watch, a radio and cosmetics, to the North Korean delegates. In this way, South and North Korea shared their hearts and paved the way for a thaw in their icy relations. Dr. Choi continues to explain.

South Korea’s first rice aid to North Korea occurred on June 25, 1995, and provided assistance to flood-hit North Korea. Also in the 2000s, South Korea sent emergency relief supplies to North Korea when the North suffered from massive floods. The last time South Korea sent flood relief goods to the North was October 2010. Seoul offered similar aid afterwards, but the governmental-level assistance came to a halt due to North Korea’s rejection. Back in 1984, North Korea provided humanitarian aid to the South, which gladly accepted it. If the two Koreas recall that moment, bilateral flood relief aid may hopefully serve as priming water to improve their relations.
Share
Print
List