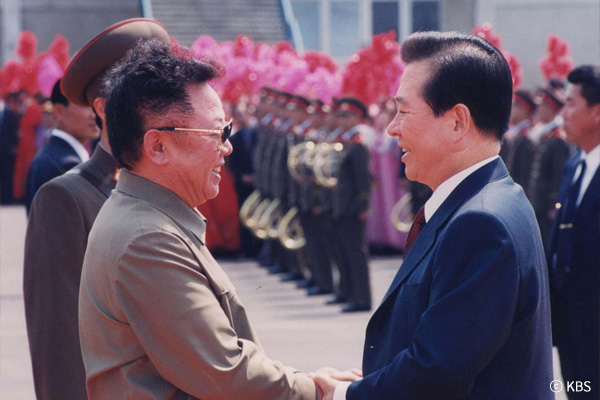 On December 10, 2000, then-South Korean President Kim Dae-jung won the Nobel Peace Prize. The late former president, who died in 2009, was the first and only Korean who has won the prestigious award for his work for inter-Korean peace and reconciliation initiated by the first-ever summit between South and North Korea. Today, we’ll look back on that historic inter-Korean summit held in 2000. Former President Kim Dae-jung hinted at the possibility of an inter-Korean summit during his inauguration speech on February 25, 1998.

Kim had been an advocate for unification since he was a presidential candidate in 1971. And he stressed the need for dialogue between the heads of the two Koreas during his inauguration speech in 1998. Later, he consistently pushed for the so-called Sunshine Policy of engagement, calling for the two Koreas to stay away from Cold-War confrontation and hostility and instead co-exist peacefully and achieve common prosperity through reconciliation and cooperation. In 2000, he appointed then-Culture Minister Park Jie-won as a special envoy for an inter-Korean summit. Let’s hear from Mr. Park who is now a lawmaker of the minor opposition Party for Democracy and Peace.

President Kim had mentioned the need for an inter-Korean summit when he was the leader of the opposition party, and he proposed an inter-Korean summit during his inauguration speech. After that, discussions for the summit progressed rapidly. At the time, North Korea said that it didn’t want to hold discussions with South Korea’s National Intelligence Service, which it claimed had hindered inter-Korean dialogue. Pyongyang said that it wanted a more responsible official who sided with the South Korean president to be a special envoy. When the president appointed me as a special envoy, I told him that the Unification Minister would be more appropriate since I wasn’t an expert on inter-Korean affairs. The president then explained to me what I just said, so I decided to assume the role. Kim Bo-hyun and Suh Hoon, then-officials from the National Intelligence Service or NIS made preparations for the summit. Suh now serves as the NIS director. Kim, Suh and I made contact with North Korean officials and finally realized the summit. Of course, we were really excited about it.

At the time, North Korea still didn’t trust the South Korean president’s summit proposal and his North Korea policy, although it thought Kim Dae-jung was different from his predecessors. At a meeting in Singapore, the North Korean side asked me various questions, when the president made the famous Berlin Declaration. I explained the declaration in detail to Song, and the North Korean official said that it felt like he was listening to the voice of the South Korean president. I was thrilled to hear that. I was sure that the summit would become a reality.

North Korea responded to South Korea’s dialogue offer in order to escape from isolation and carry out economic cooperation with the South. But it also suspected that Seoul’s “Sunshine Policy” might lead to North Korea’s openness and eventual regime collapse. It was the Berlin Declaration that dispelled the worries. On his state visit to Germany on March 9, President Kim said that the South Korean government wanted to help out North Korea amid peaceful coexistence and exchanges with the North. Thanks to the Berlin Declaration, Pyongyang began to trust the Seoul government. Afterwards, Park held several closed-door discussions with North Korea in Beijing before writing a final agreement on April 8. Two days later, he made an important announcement.

At 10 a.m. on April 10, the government announced that South and North Korea agreed to hold a bilateral summit, the first of its kind since national division, from June 12 to 14 in Pyongyang.

At the same time, North Korea also made a special announcement on an inter-Korean summit. But it was not easy to climb over a wall of half-a-century-long division and open a new way for cooperation. Let’s hear again from Park.

North Korea requested that the South Korean delegation pay tribute to the embalmed body of the North’s late founder Kim Il-sung. Of course, we said we could never do that. Due to the difference in opinion, the summit schedule was delayed by one day. On the surface, North Korea said that Sunan Airport in Pyongyang was not ready because of sudden repair work. But the real issue was the tribute thing. President Kim said that he could no longer delay the summit and he would be heading to the airport to depart for North Korea. Right before he got on the plane at Seoul Airport, North Korea told us to come to the North first and then discuss more there.

In fact, the two sides suffered from conflict even after they agreed to hold the summit. They clashed over who would sign the inter-Korean joint declaration from the North Korean side. South Korea demanded North Korean leader Kim Jong-il, while the North cited Kim Yong-nam, president of the Presidium of the Supreme People’s Assembly. To make matters worse, the North requested the South Korean delegation to visit Kumsusan Memorial Hall, where the body of Kim Il-sung is enshrined. As problems arose, the two sides even postponed the summit planned for June 12. Amid rising tensions, the South Korean president made a bold decision to press ahead with his North Korea visit.

At 8:45 a.m. on June 13, 2000, President Kim arrived at Seoul Airport in Seongnam, south of Seoul. He expressed his hope that the summit would resolve misunderstandings between the two Koreas and open the door to peace and reconciliation. At 9:18, he boarded the plane, which flew to the North on an air route that had not been open for 55 years since the division of Korea. Mr. Park recalls that how nervous the South Korean delegation was even at that moment because some problems still remained unresolved.

We were supposed to announce a statement upon arrival in Pyongyang. But the North told us not to do that. I was stunned by such a rude request and said that we must contact North Korea and issue the statement as planned. But Kim Bo-hyun and Suh Hoon said that North Korean leader Kim Jong-il might go out to the airport himself to greet our president and that’s probably why the North told us not to announce the statement. This was all happening while we were aboard the plane. I was extremely nervous. When the plane arrived in Pyongyang, North Korean foreign ministry officials entered the plane through a back door. I asked them if leader Kim Jong-il would be coming to the airport. They said they didn’t know. The South Korean entourage got off the plane and lined up. Suddenly, there was cheering from the welcoming crowd. I saw Kim Jong-il standing over there and a North Korean official coming up to the plane to escort President Kim and the First Lady getting off the plane. When the two leaders finally shook hands with each other, I was moved to tears.

The leaders of the two Koreas held each other’s hands for the first time since the signing of the armistice agreement in 1953. It was indeed a dramatic moment. The news about the unprecedented inter-Korean summit spread all around the world. South Korean people cherished hope for a new beginning in relations with North Korea, as they witnessed the historic summit, which had previously seemed impossible.