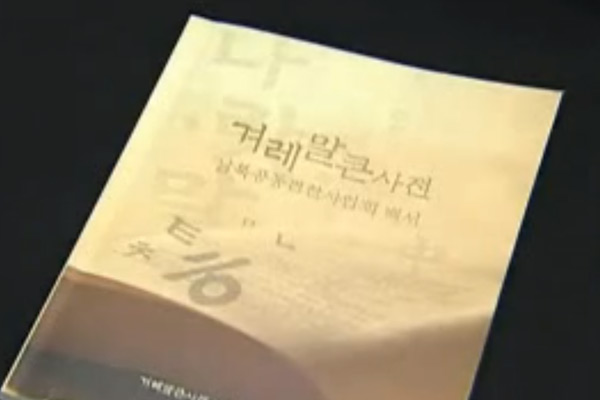 A ceremony was held at Gwanghwamun Plaza in central Seoul on October 9 to commemorate the invention of the Korean alphabet of Hangeul. During the ceremony, Prime Minister Lee Nak-yon expressed the government’s willingness to resume the project of compiling a unified Korean language dictionary in cooperation with North Korea, saying that South Korea should no longer delay efforts to understand difference with the North and narrow the linguistic gap.

The dictionary, called Gyeoremal-keunsajeon, roughly translated into “Unabridged and Unified Korean Dictionary,” is the very first integrated South Korean and North Korean dictionary created by linguists from both Koreas. The compilation of the joint dictionary is the first inter-Korean private exchange project entitled to government support in accordance with a special directive enacted in 2007.

Today, we’ll learn more about this significant inter-Korean dictionary project, with explanations from Hong Jong-seon, former Korean language and literature professor at Korea University, who serves as the chairman of the South Korean side of the joint inter-Korean compilation committee.

When the late Rev. Moon Ik-hwan visited North Korea in 1989, he suggested to then-North Korean leader Kim Il-sung that the two Koreas write a Korean language dictionary. The North agreed on the idea. Years later, in 2004, a South Korean group called Toward One Korea and North Korea’s National Reconciliation Council signed an agreement regarding dictionary compilation. In February 2005, the South-North joint compilation committee was launched at Mt. Geumgang in North Korea.

North Koreans tend to use native words or expressions, while South Koreans have accepted many foreign words. In some cases, the two sides pronounce the same foreign words differently. For example, the word “tank” is pronounced as something like “ttank” in North Korea. Even the same Korean words have different meanings in the South and the North.

The term “dongmu”, for instance, is defined as “close friend” in the South Korean dictionary, but it refers to “comrade” or “revolutionary colleague” in the North. I think people in South and North Korean can talk with each other without feeling awkward only when they understand and overcome the emotional differences of those words.

Koreans have used the same language, but national division has resulted in different vocabularies and speech patterns.

We can just say “Let’s split the bill.” But many South Koreans say “Let’s go Dutch.” At first, I had no idea of what that meant.

This North Korean defector says that she has difficulty communicating with South Koreans because they use foreign expressions too often.

It is true that South Korea has actively opened up its society and culture to the outside world, embracing and incorporating foreign words and expressions. Moreover, the development of digital culture has given rise to a number of wholly new vocabularies found only in the South. In contrast, the closed North Korean society has been reluctant to accept foreign lexicons, using what it calls pure Korean as a means of instilling socialist ideas in people.

The long division of Korea is feared to deepen this estrangement in language. To resolve this problem, the two Koreas decided to compile a joint dictionary.

For Koreans, unifying their divided peninsula is a topmost task. But even if Korea is unified politically and geographically, confusion and conflict will still arise unless the nation achieves unification in society and culture. That’s why people in the two Koreas should first prepare for social and cultural unification so they can communicate with each other emotionally. Since the language comprises the basis of a society and culture, it is essential for the South and the North to understand each other’s language and integrate it.

In preparation for a unified era, the envisioned dictionary includes not only words used in South and North Korea but also those employed by ethnic Koreans around the world. For a project that carries great historical and linguistic significance, only the best linguists and lexicographers from the two Koreas were asked to participate. Together, they embarked on an ambitious project to coordinate and align lexicons and orthography of the two sides for a unified Korean dictionary.

But it was quite a challenge selecting the words to be included in the dictionary, defining them, and unifying writing conventions. If the two sides use two different words to describe the same thing, only one should be chosen to enter the dictionary. This process wasn’t easy.

South and North were different in some points, including writing rules. For both sides, it was difficult to give up their principles because the language had to do with people’s daily lives. Scholars could compromise from an academic point of view, but they couldn’t if they considered public sentiment. So from time to time, linguists from both sides stuck to their own views. But they also knew how important the project was. They tried to understand each other and make concessions.

As Mr. Hong explained, the linguists of the joint compilation committee had a hard time coordinating their different views. But they had a strong sense of duty to carry out the project successfully and were able to narrow their differences through sustained communication.

On August 16, 2005, six months after their first gathering, they agreed on a general set of principles. Accordingly, the dictionary would first include words used by both Koreas and later rectify differing vocabularies by mutual agreement. In this way, the language experts came to include more than 300-thousand words in the dictionary.

First, we selected words that appeared both in South Korea’s “Standard Korean Dictionary” and the North’s “Chosun Language Dictionary.” Among them, we removed words that people seldom use in everyday life. Then we had some 200-thousand words. We then added 100-thousand more, including new terms and constructions that were absent from the two dictionaries as well as expressions found in local dialects. So we chose to include about 300-thousand words in the end.

In the next stage, South Korean linguists arranged the words that begin with the first letter of the Korean alphabet, and their North Korean counterparts were in charge of the words that begin with the second letter. In this way, lexicographers from the South and the North worked on each letter by turns in alphabetical order. Then, they exchanged the list to let each other review it. The words approved by both sides were selected as final entries.

If the two sides had differing views on some words, they promised to examine them again at future meetings. 300-thousand words were supposed to go through this grueling process. It was an enormous task that would take a considerable amount of time.

In April 2007, South Korea’s National Assembly passed the Act on the Joint Board of South and North Korea for the Compilation of the Unabridged and Unified Korean Dictionary. Next week, we’ll learn about how much progress was made on pushing forward with the project and its future prospects.