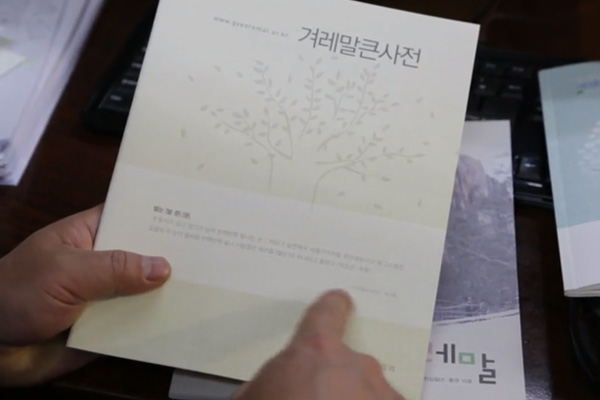 Today, we’ll look at the second-half of a story we began last week about the joint dictionary project. Let’s hear from Hong Jong-seon, chairman of the South Korean side of the joint compilation committee.

From 2005, the inter-Korean compilation committee met four times a year to discuss compilation guidelines and it began to compile a dictionary at the 17th meeting session in 2009. For 300-thousand entry words, lexicographers from the South and the North worked on each letter by turns in alphabetical order. Some 20 linguists from South Korea participated in the task.

The words agreed upon by both sides were chosen as final entries. If the two sides had differing views on some words, they discussed them again at regular meetings in the future. If they still didn’t reach an agreement, they left them undecided for future review.

According to the joint compilation committee, the Korean used in North and South Korea diverge 34 percent and 64 percent in regular vocabulary and technical terms, respectively.

To overcome this barrier, the compilation committee aligned vocabularies based on South Korea’s “Standard Korean Dictionary” and North Korea’s “Chosun Language Dictionary.” Members from the South and the North divided the work and compiled their respective parts more or less independently. They held talks four times a year to review and exchange thoughts on the other side’s progress.

The fifth committee meeting was held in Beijing in March 2006. From then on, debate over how to proceed with the work became heated.

At first, both sides were pretty nervous. South Koreans usually refer to North Korea as “Bukhan(북한), while North Koreans call South Korea “Namjoseon(남조선).” But the committee members were not supposed to use those words. When a South Korean researcher happened to utter the word “Bukhan” by mistake, the North Koreans looked upset and their faces suddenly hardened. They asked frankly “Do people in “Namjoseon” all talk like that?”

But after regular contact over five to ten years, the participants came to build trust and understanding between each other. They can now tolerate mistakes and are not disturbed by the other side’s words. For example, South Koreans use the word “yeowi-da(여위다),” meaning “becoming thin.” In North Korea, the same word is used for animals, not humans.

One day, a South Korean committee member used this word when meeting a North Korean member. It may have offended him, but he politely said, “Yes, I’ve lost some weight. By the way, the word is not used for humans in North Korea.” In this way, both sides tried to understand each other.

The committee members have held 25 meetings so far, from the first meeting at Mt. Geumgang in February 2005 to the 25th one in the Chinese city of Dalian in December 2015. In the process, South and North Korea were able to build mutual confidence through which they could recognize, understand, and appreciate their differences.

The compilation work made considerable progress as well. Of the selected entry words, 125-thousand words have been compiled. The two sides also agreed on how to arrange consonants and vowels in the correct order. If things had proceeded uninterrupted, the dictionary was set to be complete in April 2019.

The regular meetings of the joint compilation committee came to a halt due to deteriorating inter-Korean relations. Still, South Korea has continued with the work, even working on the part to be compiled by North Korea, in the belief that the unified dictionary should be complete by all means even if the two sides cannot meet. Of course, the part compiled by South Korea should be reviewed by the North and discussed at future meetings. When both sides approve all the selected entry words, they will move toward the stage of proofreading before finally completing the dictionary.

Although the joint committee meeting has not taken place for a few years, the South Korean committee has kept the work going on its own, editing the words that have already been approved by both sides.

The dictionary is now about 78 percent complete. Mr. Hong hopes that the joint committee will be able to convene its 26th meeting before the end of this year.

I do hope that the members of the joint committee will meet again soon and the dictionary project will not be suspended ever again. The project is set to end in spring next year, but a delay in the schedule will be inevitable because the two sides haven’t met for years. I think the publication of the final version of the dictionary will take about five more years. I wish the work will proceed well and the two sides will be able to proudly unveil the complete unified Korean language dictionary in 2024. With this mission in mind, we’ll continue to work hard on this project.

South and North Korea could narrow their differences if and when they recognize the differences in language and communication. Fortunately, the dictionary project is picking up momentum once again after this year’s inter-Korean summits. Here’s hoping that the project will resume as early as possible so as to establish common ground between the two Koreas and contribute to the reunification of the Korean Peninsula.