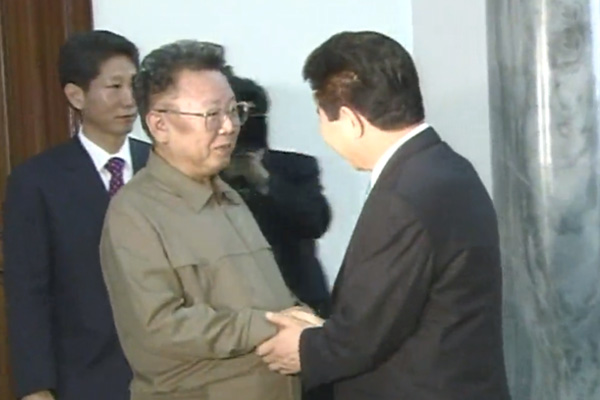 For three days starting September 18 this year, South Korean President Moon Jae-in and North Korean leader Kim Jong-un held a summit in Pyongyang. It was the third such inter-Korean summit held in the North Korean capital.

The 2007 meeting, in particular, is considered by many to be a historic milestone on the path toward peaceful co-existence and common prosperity between South and North Korea and toward normalization of relations between North Korea and the U.S.

Today, we’ll take a look back at the second inter-Korean summit in Pyongyang in 2007 with Lee Kwan-se, director of the Institute for Far East Studies at Kyungnam University, who as South Korean Vice Unification Minister served as the chief delegate of the preparatory meeting for the 2007 inter-Korean summit.

North Korea test-fired ballistic missiles in July 2006 and carried out its first nuclear test in October that year. The provocations led the U.N. to adopt a resolution against North Korea.

South Korea felt the need for an inter-Korean summit all the more because of worsening international sentiment toward North Korea. Pyongyang agreed, in principle, on an inter-Korean summit, but it seemed to be watching the circumstances surrounding the nation and its relations with Seoul.

Things progressed favorably in 2007, when North Korean leader Kim Jong-il expressed his strong commitment to resolving the nuclear issue and improving relations with the U.S. The six-party nuclear talks reconvened to make progress in the nuclear issue, and the diplomatic climate for an inter-Korean summit gained momentum.

Former South Korean President Roh Moo-hyun hoped for an inter-Korean summit from the beginning of his inauguration in 2003, but the political situation on the Korean Peninsula was not conducive to such a meeting.

Pyongyang admitted in 2002 it had been developing a covert enriched uranium program, sparking the second major nuclear crisis on the Korean peninsula. To address the issue, multilateral negotiations among the two Koreas, the U.S., China, Japan and Russia began in 2003.

However, after Pyongyang declared it had a nuclear weapon in early 2005 and claimed it had harvested nuclear fuel at the Yongbyon nuclear site, the US rolled out sanctions against North Korea. Then-leader Kim Jong-il responded with the first North Korean nuclear test in October 2006, further deteriorating inter-Korean relations. But things began to change in 2007.

The six-party talks produced a key agreement on February 13, 2007, and Washington lifted financial sanctions on North Korea. An improvement in North Korea-U.S. relations revitalized discussions between the South and the North.

To hold the highly important national project of an inter-Korean summit without a hitch, it was absolutely necessary to prepare everything perfectly, including the summit talks, of course, related events and the president’s itinerary. During the preparatory talks, Seoul and Pyongyang agreed on basic issues. They held working-level sub-meetings to separately deal with details such as protocol, security, telecommunications and news coverage.

The prospective inter-Korean summit should produce some positive result, as it would be held at an important time when involved countries were discussing efforts toward regional peace and the North Korean nuclear issue. To that end, we were firmly determined to prepare for the summit thoroughly and make it a successful event so the summit could contribute to creating new momentum for peace on the divided peninsula.

Mr. Lee discussed everything beforehand with North Korean officials before making decisions. He hoped the summit would help North Korea become a responsible member of the international community and bring lasting peace to the Korean Peninsula. He did his best to ensure a successful summit, even traveling to Pyongyang himself as the head of an advance team.

About two months later on October 2, President Roh appeared in front of the presidential office.

Before leaving for Pyongyang, the president said he was happy to hold an inter-Korean summit after a positive change in the diplomatic situation and cross-border relations. Traveling along the Gyeongui road, which was built as a result of the first inter-Korean summit in 2000, Roh arrived after about an hour at the Military Demarcation Line in the Demilitarized Zone.

This line is a wall that has divided our nation for half a century. Now, as president, I cross the forbidden line. I’m sure many more people will follow suit and the line will gradually be erased.

30 meters away from the Military Demarcation Line, the president made a short statement before walking across the Military Demarcation Line with First Lady Kwon Yang-sook. Roh was the first South Korean leader to cross the border over to North Korea on foot. Having prepared for the president’s overland journey to Pyongyang, Mr. Lee was filled with emotion as he watched the scene unfold.

For the 2000 summit, then-South Korean President Kim Dae-jung traveled to Pyongyang by air. It took less than an hour from Seoul to Sunan Airport in Pyongyang. For the 2007 summit, Seoul first pushed the idea of President Roh taking the cross-border railway for the trip. But he eventually walked across the land border separating the two Koreas and again rode by car to Pyongyang to discuss peace efforts with the top North Korean leader.

This fact itself carried great significance, as it showed the commitment to ending decades-long division and hostility between the two sides and also raised hopes for peace and prosperity in the region. I was very proud and deeply moved.

Indeed, the South Korean president’s first steps on North Korean soil were a highly symbolic historic milestone. He arrived in Pyongyang at 11:30 a.m. that morning.

The South Korean president arrived at the square in front of the People’s Culture Palace amidst hearty cheers from Pyongyang citizens. There, he was welcomed by North Korea’s ceremonial head of state Kim Yong-nam(김영남).

The two men took part in an open car parade enroute to the April 25 House of Culture, the preferred venue for state welcoming ceremonies. It was the second and last car parade featuring a foreign head of state under the Kim Jong-il regime, with the first one taking place during former Chinese President Jiang Zemin’s visit to North Korea in 2001.

The pomp and circumstance suggest that North Korea, too, had high expectations for the second inter-Korean summit. In fact, leader Kim Jong-il made a surprise appearance at the April 25 House of Culture.

North Korea never discloses the leader’s schedule or movements for security reasons. So, journalists and protocol officials usually have to make decisions at the last minute, which often leads to a delay in their work.

At the 2000 summit, Kim Jong-il made an unexpected appearance at Sunan Airport to greet his South Korean counterpart. But at the 2007 event, we knew the North Korean leader would appear at the April 25 House of Culture, at least before President Roh arrived there, although we were informed of the plan rather late.

Keen attention was paid to when, where and how the two leaders would meet, but North Korea never confirmed Kim’s schedule in advance.

The leader’s appearance was kept secret until the last moment, and the venue for an official welcome ceremony was also changed several times. But finally, Kim Jong-il made his appearance.

The second day of the summit on October 3 featured meetings comprised of two primary sessions—one in the morning and the other in the afternoon. And the following day, the two sides announced the results of the summit.