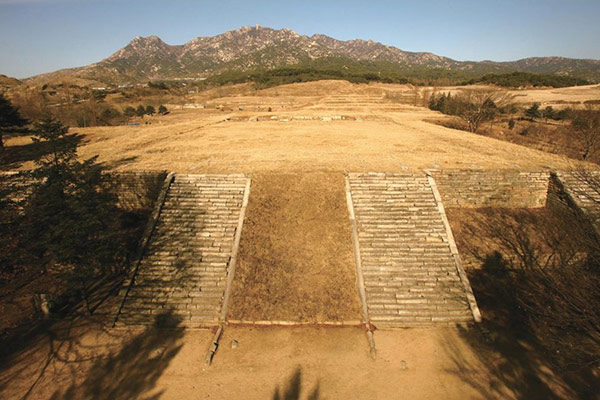 South and North Korea held working-level talks on September 6 and agreed to resume their joint excavation of an ancient palace site of Manwoldae in Gaeseong. A total of seven rounds of excavations were conducted on this historical site until the project was suspended in 2015.

Under the agreement in September, the two sides held a fresh round of joint work from October 22 to December 10. The 50-day period might be too short to bridge the three-year gap, but historians from both sides of the border got together once again to jointly uncover relics from the palace site, this time focusing more on the embankment area, and to study the history of the Goryeo Dynasty. Significantly, the two Koreas resumed the work this year, which marked the 1,100th anniversary of the founding of the old Korean kingdom.

Today, we’ll take a look back at this cross-border project that has been kept afloat amid ups and downs of inter-Korean relations, demonstrating that there is no border or division as far as cultural properties are concerned. Let’s hear from Ahn Byung-woo, co-chair of the Inter-Korea Historian Association.

In 2005, North Korea was preparing to register the Gaeseong historical site on the world cultural heritage list. In November that year, historians from South and North Korea held a meeting to assess the value of the area. At the meeting, the two sides shared the view that a joint survey of rather unknown cultural relics would reveal their historical and cultural values and therefore facilitate the process of adding them to the world heritage list. For that purpose, both sides agreed to select one historical site in Gaeseong, namely, Manwoldae, for a joint excavation.

Built at the foot of Mt. Songak in 919, Manwoldae spans 250-thousand square meters of land. There, the royal palace of the Goryeo Kingdom stood for about 400 years, repeating the process of being damaged and reconstructed, until it was destroyed during the Red Turban invasion in the year 1361. Today, only part of stairs and castle walls remain, but this valuable cultural heritage represents the essence of the splendid royal culture of Goryeo.

In 2005, North Korea sought to put the Gaeseong historical area on the world heritage list, and the two Koreas agreed on the joint excavation of the Manwoldae site during their 17th ministerial talks the same year.

The joint dig of Manwoldae started on May 18, 2007. The South Korean excavation team held a traditional ritual wishing for successful work and carried out an archaeological field survey with North Korea’s National Reconciliation Council. Although the survey lasted for only a few hours, the team unearthed dozens of relics, including pieces of inlaid celadon and fragments of roof tiles inspired by those from the ancient Korean warrior state of Goguryeo. It is easy to imagine that the scholars from both sides were very excited.

Before the excavation, the area was mostly a field. As an official in charge of the work, I was deeply worried that we would not find anything there. But upon digging, I thought I had worried unnecessarily because I saw relics through a crack in the ground.

At first, South and North Korea divided survey sections and worked separately. So, it wasn’t a “joint” excavation, to be exact. From the second phase, however, the two sides worked together, mingling with each other in the same sections.

The survey was conducted on the west side of Manwoldae to figure out how relics were scattered. Historians and archaeologists from the two Koreas worked in their respective sections at first, as Mr. Ahn said, but they soon became one. Perhaps, they were reminded of the fact that Goryeo established an independent, unified state on the Korean Peninsula without outside intervention, and their motivation to revive the proud history brought them together. And in November 2015, the joint excavation team broke out in cheers.

During the seventh round of excavation, they discovered a piece of metal type at the southern part of Manwoldae’s west side.

We found a new piece of metal type on November 14, 2015. Until then, there were only two pieces of existing Goryeo metal type, one in South Korea and the other in the North. The one in North Korea had also been excavated from the same Manwoldae site.

The newly-found metal type was pretty small, only the size of a fingernail. Actually, it was difficult to discover it with the naked eye. We sifted out the soil to allow fine earth to settle to the bottom and small stones to remain in the strainer. That’s how we found the one tiny metal type.

As you know, Korea created and used the world’s first metal type. Thinking that, we were deeply impressed to uncover and see the precious relic.

The excavated metal type is 1.36 centimeters wide, 1.3 centimeters long and 0.6 centimeters in thickness. It is much more sophisticated than the previous one and dates back at least one century earlier than the movable metal type that was used to publish the Gutenberg Bible in 1455.

Many more historical artifacts saw the light of day as a result of the inter-Korean joint excavation.

South and North Korea agreed to excavate a 33-thousand square-meter area on the west side of the palace site. So far, about 70 percent of the work has been completed. In the process, a huge number of remnants—about 20-thousand—have been unearthed. They include building sites from the Goryeo era, walkways, corridors and waterways.

In October 2015, some of the uncovered relics were displayed at an exhibition at the National Palace Museum of Korea in Seoul. Around that time, a similar exhibition was held in Gaeseong as well.

Mr. Ahn now talks about his future plans and hopes.

The next round of joint excavations will start next February. Manwoldae embodies the cultural and spiritual values of Goryeo people, who worked hard to build the magnificent palace. It is greatly significant that the two divided Koreas have collaborated to excavate the palace site of the unified kingdom of Goryeo.

There are many more areas that the two Koreas can work on together, other than the Manwoldae excavation project. Through the projects like this, I hope Koreans will realize that they have, in fact, walked the same path together for a long time and should also go together in the future.

It’s been 73 years since the division of the Korean Peninsula, but the two Koreas have taken steps toward bilateral dialogue and cooperation. Those steps are believed to have contributed to this year’s diplomatic thaw in bilateral relations. And both Koreas will continue to move toward unification, demonstrating that history can be made by those who have dreams.

This is the last edition of “Moments towards Unification,” the second part of the program. From next year, we’ll present you with a new corner.