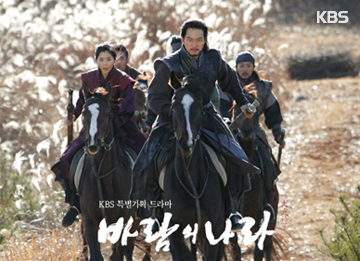 King Daemusin is known as the god of war. The literal meaning of “Daemusin” is “great holy warrior king.” As the name suggests, the king conquered many neighboring states during his lifetime and led massive territorial expansion in the early Goguryeo period.

King Daemusin was born in the year 4 as the third son of King Yuri, the second ruler of Goguryeo. As a young prince his name was Mu-hul. From childhood, the prince was intelligent, tough and resourceful. He was proclaimed crown prince for his distinguished service in a battle with the northern state of Buyeo. The relationship with this strong state was his biggest task after he became king at the age of 14. In the fourth year of his reign, the king bravely launched an attack against Buyeo. But it was like a duel between David and Goliath, since the fledgling Goguryeo kingdom challenged the already powerful state of Buyeo, which was capable of mobilizing as many as 50-thousand troops for one battle. The king’s ambitious expedition ended up in a crushing defeat, with the king himself narrowly escaping death. But the king humbly admitted that it was all his fault and even tended to the wounded soldiers personally. His subjects respected him all the more and they were firmly determined to unite under the great king. While the king lost a war, he never failed in politics. He was able to strengthen internal unity and never let his kingdom suffer again. In contrast, Buyeo was divided by internal conflicts after the war and was eventually absorbed into Goguryeo.

King Daemusin’s military expedition continued to expand his kingdom’s territory. While he conquered several smaller tribes, he never plundered the villages of the defeated states. He annexed them into Goguryeo territory instead and accepted local residents as his own people. Neighboring states learned that Goguryeo was not a brutal conqueror but a powerful country that continued developing. Some tribes voluntarily surrendered to Goguryeo.

The king’s conquest of the city state of Nakrang involves a romantic yet tragic love story. The king sent his son, Prince Hodong, to attack Nakrang, where he fell in love with a princess. The Nakrang princess is said to have torn off a mysterious drum that possessed the power to automatically sound an alarm when enemy troops invaded. The princess chose to betray her country for her love. As a result, the self-sounding drum never worked when Goguryeo forces attacked Nakrang and her nation fell into ruin. She was killed by her angry father and Prince Hodong lamented over her death. This legendary love story from the 1st century is well known in Korea to this day and it has been adapted into films, dramas, musicals and ballet performances.

Legend has it that Prince Hodong killed himself in despair over the death of the Nakrang princess. But historical records say King Daemusin’s first wife entrapped the prince, who was the son of the king’s second wife. As the king’s suspicion fell on Hodong, the ill-fated prince took his own life without giving a reason. In fact, when King Daemusin was young, he witnessed his older brother Prince Hae-myeong commit suicide, as ordered by his father, King Yuri. Later, King Daemusin saw his own son suffer the same fate. The tragedy was apparently a great shock to the king. After his son’s death, the king made no major achievements until he died in the year 44. He was 40. Yet, during his eventful 26-year reign, Goguryeo became stronger to lay the groundwork for future kings to further expand the power of the kingdom.
Share
Print
List