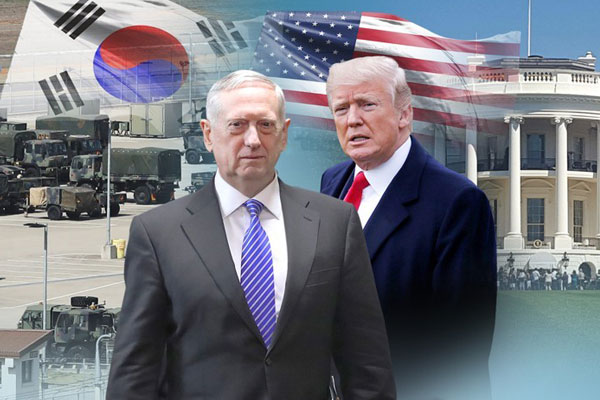 During a Christmas video conference with U.S. troops stationed abroad on Tuesday, President Donald Trump said that the U.S. does not want to subsidize rich countries while suffering disadvantages. He was referring to the sharing of defense costs for maintaining U.S. troops stationed overseas.

Just the previous day, Trump tweeted that the U.S. is substantially subsidizing the militaries of many very rich countries all over the world, while at the same time these countries take total advantage of the U.S. and its taxpayers. He added that he sees this as a problem and it is being fixed.

Although he didn't single out South Korea, it is widely believed that the comment is directed at Seoul, with which the U.S. is currently negotiating defense costs. The working-level dialogue between Seoul and Washington fell apart earlier this month, apparently as the U.S. leadership rejected a move to narrow the gap in cost-sharing.

A government source said talks on the issue are nearly back to square one and the two sides couldn’t even schedule the next meeting, which would be the eleventh round of negotiations.

The current five-year accord between the two expires on December 31st this year.

If the negotiations get drawn out, it could lead to a setback in paying South Korean workers inside American military bases. About a third of Seoul's defense cost payment is used for such workers' wages.

The U.S. Forces Korea has reportedly warned that they may be forced to go on unpaid leave.

Currently there are 28-thousand-500 U.S. troops stationed in South Korea.

The Wall Street Journal reported that the U.S. government wants Seoul to fork out 50 percent more for the upkeep of troops which would translate into a total of one-point-two billion dollars a year.