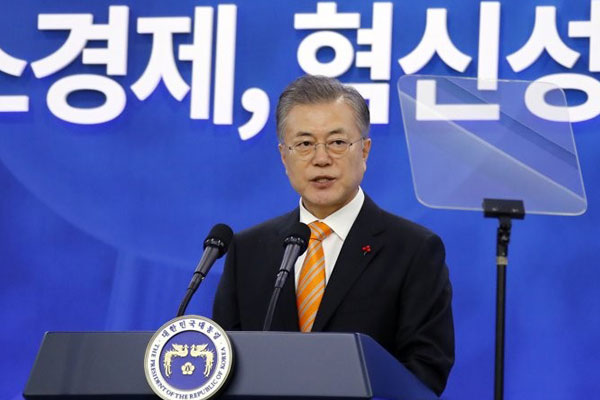 "The hydrogen economy will open doors to a new opportunity for us."

"The government's goal is to make the country become the world's number one exporter of hydrogen cars and fuel cells by 2030. Ulsan is at the center of it."

At a promotional event in the southeastern city of Ulsan on Thursday, Moon said the government aims to increase the number of hydrogen vehicles to one-point-eight million by 2030.

Ulsan is where the nation's automotive production bases are located. He said the hydrogen economy will be a golden opportunity for the city, home of the world’s first hydrogen vehicle factory for mass production.

"Unlike carbon, which creates greenhouse gas and fine dust, hydrogen is a clean energy that produces only water as a by-product. Also, hydrogen cars have the effect of purifying fine dust when in operation."

"Should the number of hydrogen cars reach the government target by 2030, it is forecast to reduce the amount of fine dust produced by about 30-thousand tons, or about ten percent."

For Hyundai Motor, the government roadmap calls for manufacturing a total of six-point-two million hydrogen cars by 2040.

Hyundai has sold only about two-thousand so far. Only 14 hydrogen charging stations are operating in the country. That number will rise to one-thousand 200.

The government also predicted that the plan will help create some 200-thousand jobs in the new energy sector by 2030.