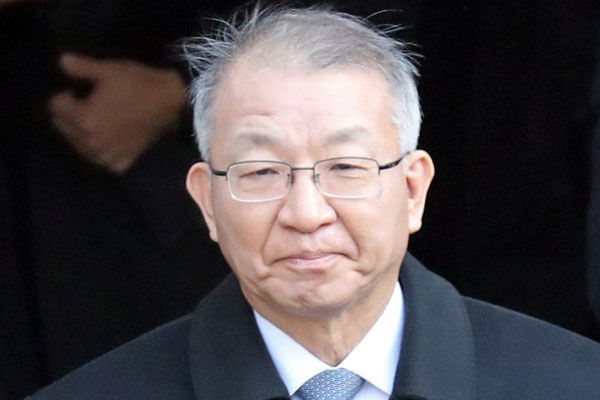 The Seoul Central District Court issued an arrest warrant for Yang Sung-tae just before 2 a.m. Thursday, citing that his charges of abusing authority were credible and that he presents a risk of destroying evidence given his position.

Yang was immediately taken into custody at Seoul Detention Center.

The former Supreme Court chief justice is the first former or sitting head of South Korea's judiciary to be questioned by prosecutors as a criminal suspect and placed under pre-sentencing detention.

Yang, who headed the top court from 2011 to 2017, is accused of ordering the National Court Administration(NCA) under the top court to seek ways to interfere in trials deemed politically sensitive to the previous Park Geun-hye administration.

He allegedly attempted to influence trials as a political tool to win the Park administration's favor for his plan to establish a new court of appeals.

One of the trials involved Korean victims of Japan's wartime forced labor. Yang allegedly orchestrated delays to the damages suit deliberation to curry favor with Park, who was seeking amicable relations with Tokyo.Yang is also suspected of pressuring judges in charge of such trials to deliver verdicts in Park's favor and of drawing up a blacklist of judges critical of his appellate court project. The court, meanwhile, turned down the arrest warrant request for former justice and Yang's key aide Park Byong-dae for his involvement in the alleged crimes. Prosecutors now have up to 20 days to further question Yang before his indictment.