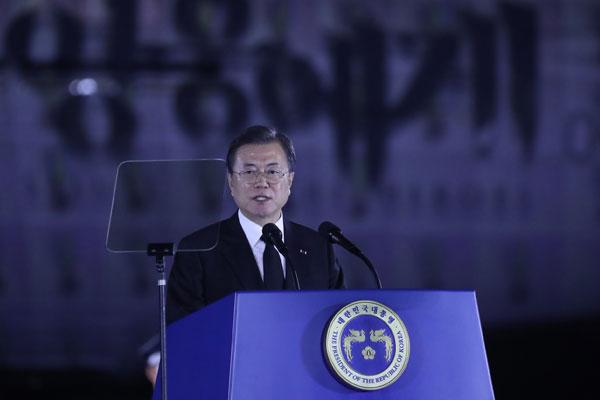 South Korea marked the 70th anniversary of the onset of the Korean War Thursday night, honoring the remains of fallen war heroes.

The 147 South Korean soldiers were repatriated the previous day from Hawaii after North Korea returned unidentified remains of its Korean War enemy to the U.S.

The remains were wrapped in the flag they fought for after forensic analyses finally confirmed their nationality nearly 70 years since making the ultimate sacrifice.

"I believe that when inter-Korean reconciliation and peace inspires the world with hope, we will be able to truly repay the noble sacrifices made by our fallen heroes who gave their entirety to the country."

During the event titled "Salute to the Heroes,” President Moon Jae-in called for an official end to the 1953 ceasefire, saying that only inter-Korean reconciliation will truly repay the noble sacrifices.

"We are against war. Our GDP is more than 50 times that of North Korea, and our trade is over 400 times that of the North. The two Koreas' competition over political and economic systems already ended a long time ago. We do not have any intention to force our system on the North. We pursue peace and intend to live well together. We will continuously search for routes that are mutually beneficial for both Koreas through peace. Before speaking of unification, I hope that we can become friendly neighbors first."

The message comes two days after North Korea announced the suspension of military action that it had been threatening against the South since earlier this month.

Despite the call for peace, the South Korean commander in chief stressed during his speech that his military will defeat any attempt to violate its territory, adding the South has the power and readiness to fend off any threat.