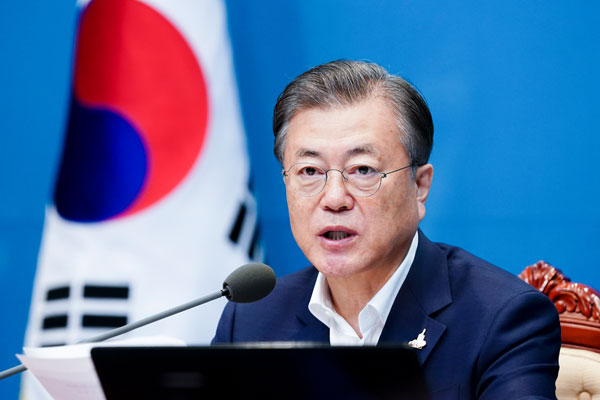 During an emergency economic meeting Thursday, President Moon Jae-in and his economy officials finalized the extra budget plan, under which some two-point-nine million Koreans will receive cash subsidies of up to two million won, or some 17-hundred dollars.

"The government has decided to create a fourth extra budget of seven-point-eight trillion won. This is a tailored disaster subsidy targeting the hardest-hit sectors and classes, providing the largest possible amount for them. First of all, a concentrated amount will be provided to small business owners and self-employed people who are most directly hit by the resurgence of COVID-19."

A total of three-point-eight trillion won will be set aside to assist some three-point-77 million people. That's roughly seven-point-three percent of the nation's entire population.

Moon noted that it was a tough decision to spend the financial assistance selectively.

"This was an unavoidable decision aimed at maximizing the impact with limited resources, as it calls for issuing treasury bonds while the end of the COVID-19 outbreak is uncertain. I ask for public understanding of the current extra budget, which is to help more vulnerable people in need first."

Another one-point-four trillion won will be earmarked to protect one-point-19 million jobs during the pandemic-driven employment crisis. The government's monthly child-rearing support of 200-thousand won for each child under the age of seven has been expanded to include children attending elementary schools.

Individuals 13 years of age and older will also receive a one-time, 20-thousand-won deduction in their mobile service fee.

Moon urged the National Assembly to promptly pass the proposed budget ahead of the five-day Chuseok autumn holiday beginning at the end of September.

The government will submit the extra budget bill to the National Assembly on Friday.