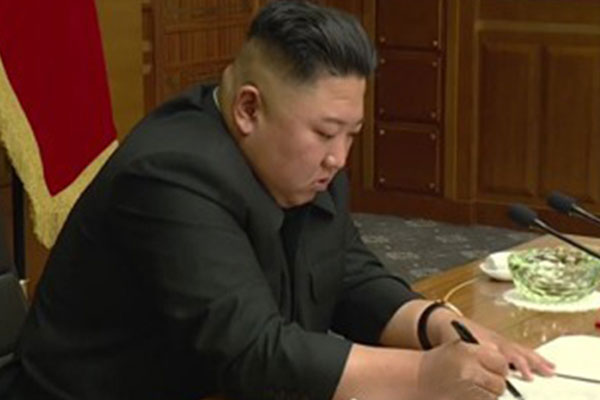 The North said in the letter that it feels "extremely sorry" for what it referred to as a "disgraceful incident."

Portions of the letter were read aloud by South Korea's National Security Advisor Suh Hoon in a nationally televised newscast.

"Chairman Kim Jong-un told us to convey his stance that he is extremely sorry for causing so much disappointment to President Moon Jae-in and our brethren in the south due to the incident in our waters, instead of offering help as they are threatened by a malicious virus."

The letter explained that North Korean troops stationed along its coast discovered an unidentified individual who had infiltrated deep into its territorial waters.

The North Korean soldiers approached within 80 meters of the unidentified individual who was on a flotation device and urged him to identify himself, only to hear him make inaudible comments.

The North Korean soldiers fired two warning shots causing the individual to duck in fear, according to the letter, and then fired around ten more shots from a distance of 40 to 50 meters, according to what the reclusive state claimed was its "code of conduct."

South Korea's national security advisor said the North pledged to take steps not to damage the trust that has been built up between the two Koreas.

"Our leadership will become more vigilant so that the small level of trust and respect that has been built up between the North and South recently will not be destroyed and reiterate the need for necessary safety measures."

But the North also voiced strong regret at what it described as South Korea's "unilateral conjecture" and calls for a reprisal. South Korea’s Joint Chiefs of Staff, citing military intelligence, reported that the body of the official appeared to have been incinerated at sea.

South Korea's national security advisor said the government will use the latest incident to review inter-Korean relations and strive to pursue cross-border ties that live up to the expectations of South Koreans.

Officials from the two major political parties reacted to the rare apology on Friday.

Ruling Democratic Party(DP) leader Lee Nak-yon noted that there has been a considerable change in North Korea's attitude compared to the past.

Speaking in parliament Friday, the former prime minister said that just as river water still flows under sheets of ice, there appears to be change even during the current grim situation in inter-Korean relations.

The main opposition People Power Party(PPP) has demanded an explanation from the Defense Ministry, saying it cannot find circumstantial evidence from North Korea's latest statement showing the official had intended to defect to the North.

PPP spokesperson Yun Hee-suk said Friday the ministry must receive a definite answer from the North as well as a pledge to prevent something similar from happening again. It should also examine internal issues.

South Korea's presidential office said Saturday that Seoul will continue to investigate the facts related to the shooting as accounts of the incident differ between the two Koreas, adding that surveillance and patrols will be strengthened on the west sea to prevent a similar tragedy from happening again.

The top office on Friday convened a meeting of the National Security Council to determine these measures, according to its media release on Saturday.

The meeting was held to analyze the difference between South Korean intelligence and North Korea's official explanation of the latest incident.

South Korea will also demand that North Korea further investigate the killing and, if necessary, request a joint probe.