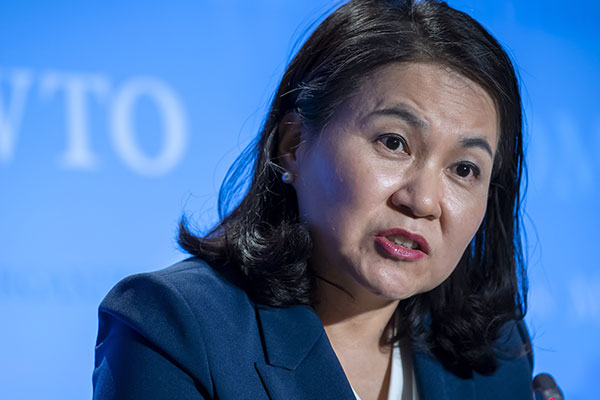 The World Trade Organization(WTO) has officially announced that South Korean Trade Minister Yoo Myung-hee and Ngozi Okonjo-Iweala, a former finance minister of Nigeria, are the two finalists to become the next leader of the international trade authority. Either candidate will be the first woman to helm the WTO in its history.

"... the recommendation is that Ngozi Okonjo-Iweala of Nigeria and Korean minister Yoo Myung-hee will advance to the third and final stage of consultations."

South Korean Trade Minister Yoo Myung-hee and former Nigerian Finance Minister Ngozi Okonjo-Iweala have advanced to the final round in the race to become the next director-general of the World Trade Organization(WTO).

WTO spokesperson Keith Rockwell announced on Thursday that a selection committee made the decision after meeting with the five remaining candidates.

"Both of the women that are in the final round are remarkably well qualified. This is something on which everyone has agreed. We've been impressed with them from the very beginning, they are people with long experience dealing with tricky issues like these."

The 53-year-old South Korean trade minister helped with the expansion of the nation's trade network through bilateral trade pacts with the U.S., China, the European Union and the U.K. Throughout her campaign, Yoo has pledged to share Korea's experience with WTO member countries.

"I am actually in the best position to understand all members' concerns and interests at WTO. As I mentioned before, I have built my career in trade in the Korean government in the last 25 years and I personally witnessed Korea grow from one of the less developed countries to become one of the largest trading nations through the multilateral trading system, so I believe that all other members should have the same opportunities that Korea could enjoy for its economic development."

Okonjo-Iweala, 66, served two terms as finance minister and a short stint as foreign minister of Nigeria. The Harvard-trained development economist spent 25 years of her career at the World Bank, serving eventually as a managing director.

The new WTO director-general is coming at a time of stress for the trade body. Amid worsening trade disputes with China, U.S. President Donald Trump has consistently blamed the WTO for being unfair and then paralyzed its dispute settlement appellate body by blocking the appointment of its judges.

The previous WTO director-general, Roberto Azevedo of Brazil, announced his resignation in May and stepped down in August amid intense pressure, citing a "personal decision."

The next WTO chief will be decided by consensus after the next round of consultations run through Oct. 27. The winner is expected to be announced at least by early November.