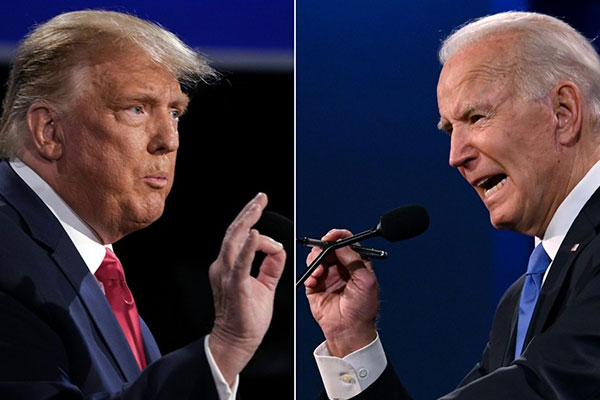 U.S. President Donald Trump and former Vice President Joe Biden held their final debate on Thursday ahead of the election on November 3. One of the key topics this time was North Korean leader Kim Jong-un and his nuclear threat against the U.S.

Kim Bum-soo wraps up their contrasting views on North Korea.

"So when I met with Barack Obama. We sat in the White House, right in the beginning. Had a great conversation. It was supposed to be 15 minutes, but it was well over an hour. He said, 'The biggest problem we have is North Korea.' He indicated we would be in a war with North Korea. Guess what? It would be a nuclear war. And he does have plenty of nuclear capability. In the meantime, I have a very good relationship with him..."

"Trump: We don't have war and I have a good relationship."

"What has he done? He's legitimized North Korea. He's talked about his good buddy, who's a thug. A thug. And he talks about how we're better off. And they have much more capable missiles - able to reach U.S. territory much more easily than ever before."

The collision came in the wake of North Korea's massive military parade earlier this month, which showcased new intercontinental as well as submarine-launched ballistic missiles.

If fully developed, the missiles might be able to carry multiple nuclear warheads to the U.S. East Coast.

(Moderator: Let me follow up with you, Vice President Biden. You said you wouldn't meet with Kim Jong-un without preconditions. Are there any conditions under which you would meet with him?)

Biden: On the condition that he would agree that he would be drawing down his nuclear capacity. To get the... The Korean Peninsula should be a nuclear free zone."

"Kristen, they tried to meet with him."

During the Obama administration, North Korea carried out four nuclear tests. In 2018, Trump held his first summit with the young North Korean dictator in Singapore to defuse the intensifying missile threats, but the second summit in Hanoi the following year collapsed due to gaps on the terms of denuclearization.