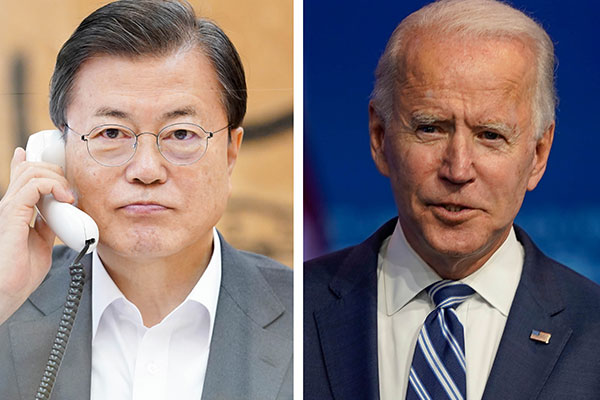 South Korean President Moon Jae-in and U.S. President-elect Joe Biden held their first telephone talks on Thursday. This came as Seoul is concerned that the next American president could bring changes to the U.S. approach to North Korea.

After the 14-minute telephone conversation, President Moon Jae-in's spokesperson assured reporters that the next president of the United States will continue to share priorities with Seoul.

"Emphasizing that South Korea is the linchpin for security and prosperity in the Indo-Pacific, Biden vowed to maintain U.S. defense commitments on the Korean Peninsula and to closely cooperate on resolving the North Korean nuclear issue."

With Joe Biden's transition team signaling plans to reverse the incumbent administration's key foreign and domestic policies, Seoul is concerned that Washington may not continue honoring the agreements President Donald Trump and North Korean leader Kim Jong-un signed at the Singapore Summit in 2018.

"President Moon expressed hope to closely communicate with the president-elect in the future-oriented development of the alliance that has defended the shared values of democracy and human rights for the past 70 years and been the basis for peace and prosperity on the Korean Peninsula, and to achieve denuclearization and lasting peace in the region."

Trump and Kim agreed to work toward denuclearization and building a lasting and stable peace regime on the Korean Peninsula, but during his campaign, Biden said Trump legitimized North Korea, calling the young North Korean dictator a thug.

On the day Biden declared his election, South Korea sent Foreign Minister Kang Kyung-wha to Washington, where she held talks with Democratic Senators Chris Coons, Chris Murphy and other members of the U.S. Congress close to the next American president.

"They are incumbent senators who previously expressed much support for South Korea-U.S. relations, and along such lines, I thanked them for backing our [Korean Peninsula] peace process and other issues. (As the transition committee begins to operate, we believe that they will take on important roles when the new administration is inaugurated...) As they expressed their strong support for our [Korean Peninsula] peace process, I explained to them the Korean War-ending declaration that we have pursued."

Seeking to revive the dying momentum for dialogue with Pyongyang, President Moon proposed that the U.S. and North Korea sit down to discuss ways to officially end the Korean War and find a breakthrough to re-embark on arduous nuclear dismantlement talks.

Two Koreas are still technically at war because fighting in the Korean War ended with only a ceasefire agreement and not a peace treaty.

Kang said she does not believe Biden will revert to the strategic patience approach that had been favored by the Obama administration.

In an interview with KBS World Radio before Biden's election, two former U.S. ambassadors, Dr. Robert Gallucci and Kathleen Stephens, predicted that Biden will take a more traditional approach in dealing with North Korea, and that Seoul might prefer that change.

"I think it would be fair to say that President Moon and his administration have had a hard time coping with the American approach to dealing with North Korea. And the prospects of improving the relations between North and South has had to be, if you will, put aside while the United States pursued its position of maintaining a plateau in relations with the North Koreans. And that was not exactly, as I understood it at least, what President Moon would have preferred."

"President Biden would return to a more traditional approach, which would, I think, understand that given all that's happened in terms of North Korea's development and improvement in its nuclear and missile capabilities over the past four years and the past 15 and 20 years, Biden would set some realistic goals. But in principle, the principle would be underscored that North Korea should give up its nuclear weapons and its missile program eventually."

With Biden elected, Seoul also gets a break from the Trump administration's pressure for a steep hike in the cost to maintain American forces on the Korean Peninsula.

In an op-ed to Seoul-based Yonhap News Agency published during his campaign, Biden vowed not to "extort" South Korea with what he called "reckless threats" to remove American troops from the Korean Peninsula.

The South Korean presidential spokesperson said Moon and Biden will hold their first in-person talks swiftly after the U.S. presidential inauguration in January.