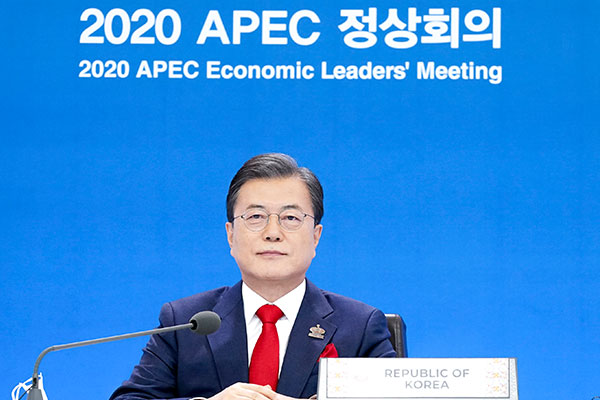 He said measures to facilitate travel by essential workers also need to be actively discussed.

He added that South Korea is minimizing the pandemic’s impact on the economy by opting for continued exchanges over closing borders and said future growth of the Asia-Pacific depends on expanded balance in which everyone gains from free trade.

Moon also emphasized the need for inclusive cooperation that will prevent the pandemic-induced crisis from worsening inequality and introduced Seoul’s related efforts, including the adoption of the Korean New Deal that supports stronger job security and a social safety net as a new national development strategy.

Moon also took part in a virtual Group of 20 conference over the weekend.

On the first day of talks, G20 leaders were expected to discuss quarantine and economic responses aimed at fighting the pandemic and restoring growth and jobs.

On the second day, issues such as support for the vulnerable, climate change and protecting the Earth's environment were tables for discussion.