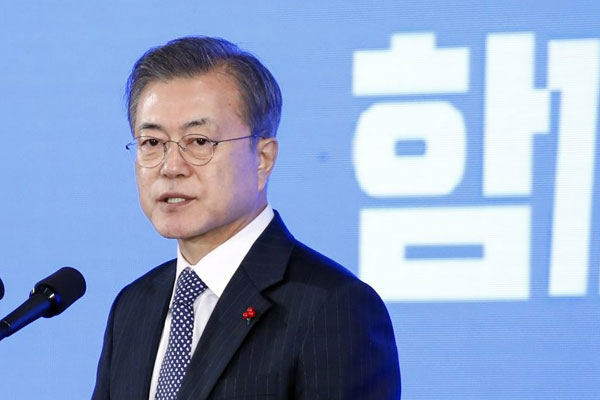 President Moon Jae-in said South Koreans can be proud that their nation became only the seventh in the world last year to top 600 billion dollars in exports as well as have a population of more than 50 million and attain 30-thousand dollars in per capita income.

Speaking at the headquarters of the Korea Federation of Small and Medium-sized Enterprises in Seoul on Wednesday, Moon, however, said that serious challenges lie ahead.

"The economic model which had chased advanced economies has reached a limit. We have become affluent, but the path to be affluent 'together' is a long way off. We also have the task of having to attain a balance between exports and domestic demand from being an export-oriented economy. We need 'innovation,' which creates value and a new industrial policy that can overcome the structural limitations of our economy."

While he acknowledged that his economic reform drive needs tweaking, he made it clear that the government will stick with its broad layout.

"It will take time and there will be disputes. There could be apprehension because it's not a path we've taken before. There must be parts that the government hadn't foreseen and hadn't kept an eye on. There are critical voices asking why they have to wait for another day. But the road that will change our economy is a road that we must traverse."

In order to boost the struggling economy and generate jobs, he said the government will create a business-friendly environment conducive to investment and spend more than 20 trillion won on research and development this year.

He also pledged to tighten the social safety net. He promised to follow through on the government's support measures for self-employed workers and to turn more irregular jobs into permanent positions.

He ended the address by briefly touching on North Korea, vowing to establish permanent peace on the Korean Peninsula.

"The peace we have now is so far only temporary. [This year, I will] do my best to transform the currents of peace into big waves that cannot be reversed."