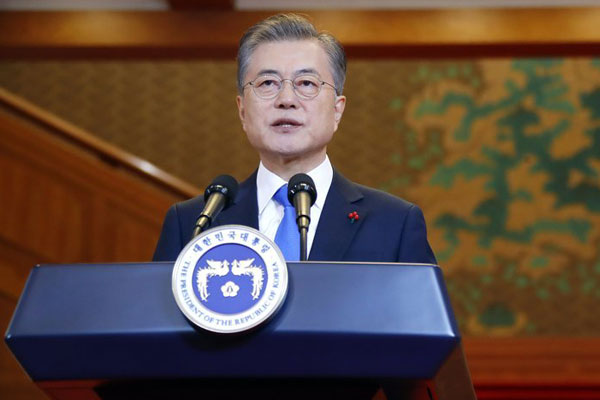 "This year, the goal is to prove that the government's economic policies are heading in the right direction in the lives of our citizens. We must bring them results. Small- and medium-sized companies will grow together with conglomerates, and small business and store owners will grow together with the Korean people as regions see growth according to their local characters this year."

Moon on Thursday held a news conference at the presidential office, laying out his plans for the year 2019, which also include bold investment in future industries.

"Starting this year, we will begin investment in strategic innovative industries. A total of one-point-five trillion won worth of budget will be invested in the three key bases of data, artificial intelligence and hydrogen-based industries. A total of three-point-six trillion won will be injected into eight-leading innovative projects, including constructions of smart factories, smart cities, self-driving cars and drones."

This came as Moon acknowledged that his administration didn't meet public expectations for creating more jobs over the past 20 months in office.

"The Gaesong industrial complex and tours to Mount Geumgang were beneficial to both the South and the North. I welcome North Korea's intention to resume the projects without any conditions attached. With North Korea, we have resolved the tasks needed to resume the Gaesong factory park and the tours to Mount Geumgang. We will cooperate with the U.S. and the international community to swiftly solve the remaining task of resolving the international sanctions issue."

Moon said Kim's visit to Seoul will come after the second Washington-Pyongyang summit, adding that both these meetings will serve as turning points for the process of establishing peace on the Korean Peninsula.

Following his speech, the South Korean president held a question-and-answer session with reporters.