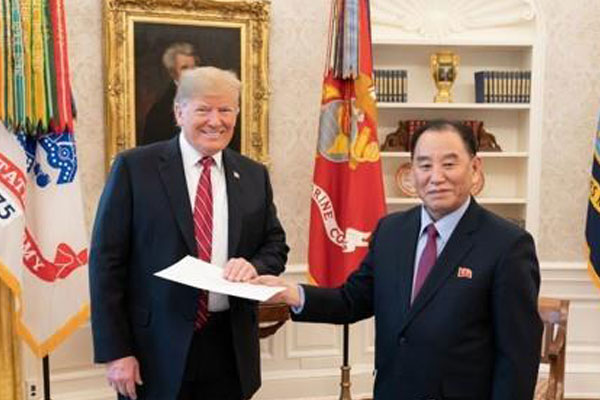 The White House announced Friday that President Donald Trump and North Korean leader Kim Jong-un will hold a second summit near the end of February.

The news came after a top North Korean official held high-level talks with the U.S. in Washington.

White House press secretary Sarah Sanders said President Trump met with Kim Yong-chol, vice chairman of the North's ruling Workers' Party's central committee, for an hour and half to discuss denuclearization and a second summit, which will take place near the end of February.

She said the president looks forward to meeting with Kim at a place to be announced at a later date.

Hanoi in Vietnam is considered the likely venue at the moment.

The exact location and time is expected to be decided through more working-level talks in consideration of security concerns.

Kim Yong-chol's latest trip to the White House was his second after a visit in June last year, which was followed by the first U.S.-North summit.

In a written statement Saturday, presidential spokesman Kim Eui-kyeom said that Seoul expects the summit to serve as a turning point in establishing lasting peace on the Korean Peninsula.

He said the Seoul government will cooperate with related nations so that the agreement reached by the leaders of the two Koreas and the U.S. last year to achieve complete denuclearization and a peace regime on the peninsula can lead to concrete, substantial results through the second North-U.S. summit.

The spokesman added that alongside close coordination with Washington, South Korea will also expand talks with North Korea and do the best it can to ensure the successful outcome of the planned summit.

Choe and Biegun are expected to discuss working-level procedures and the agenda for the North Korea-U.S. summit planned for next month as announced by the White House.

There is speculation that a meeting between the two Koreas or a trilateral meeting also involving the U.S. could also possibly take place in Stockholm.