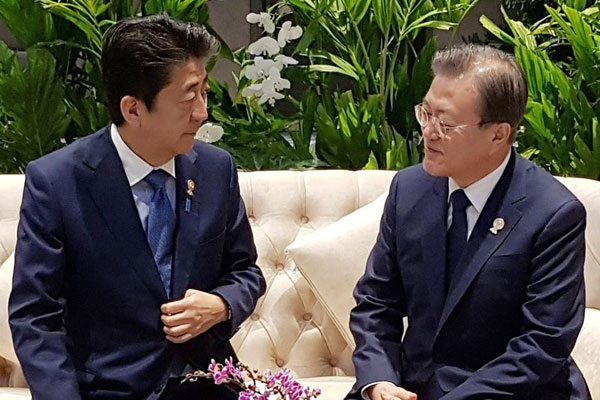 President Moon Jae-in and Japanese Prime Minister Shinzo Abe met on the sidelines of the Association of Southeast Asian NationsASEAN) Plus Three , involving the leaders from the ASEAN, South Korea, China and Japan.

During their eleven-minute talk, Moon and Abe reaffirmed Seoul-Tokyo ties are important and that pending bilateral issues should be resolved through dialogue.

Presidential spokesperson Ko Min- said the leaders expressed hopes that the two sides will hammer out ways to make substantive progress in improving ties through official consultations between their foreign ministries.

The brief encounter, which President Moon's office described as being "very friendly" yet "serious," comes 13 months after the two leaders last held official talks at the United Nations General Assembly in New York.

Moon and Abe's determination to mend ties will be put to the test as the -sharing pact, under which the two countries have shared key military intelligence regarding North Korean missile threats, expires in 19 days.

If Seoul and Tokyo come to a decision to extend GSOMIA, it will likely help pave the way for the two sides to resolve their trade and historical disputes.

Speaking at the ASEAN Plus Three following his meeting with Abe, Moon emphasized the importance of free trade.

"We need to protect free trade from head winds and bring contracting economies back to expansion. I hope that ASEAN+3 plays a central role in the enlarged cooperation. Finalizing the Regional Comprehensive Economic PartnershipRCEP) agreement will not only contribute to free trade and expanded investment in the region, but also to in East Asia and mutual prosperity."

Moon expressed concern that trade protectionism is growing again, adding that nations should redirect the world economy to a path of "expanded balance" from one of "diminished balance."