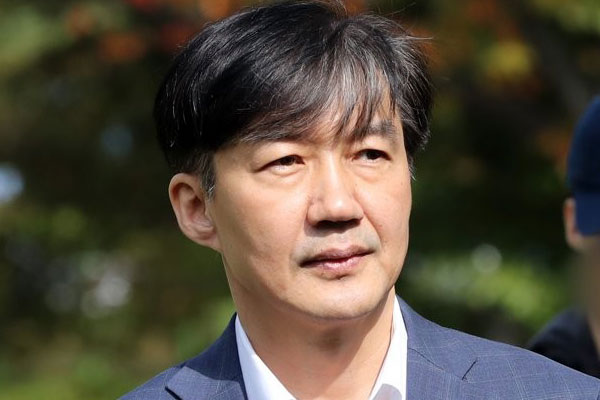 The Seoul Central District Prosecutors’ Office summoned the former Justice Minister Cho Kuk for questioning that began at 9:35 on Thursday.

The probe went on until early evening of the same day.

During the probe, the prosecution questioned to determine the extent of his involvement and knowledge of improprieties allegedly carried about by his wife, Chung Kyung-shim, a professor at Dongyang University.

is facing allegations that she invested in WFM under a borrowed name. Relevant laws on public service ethics ban direct investment by high-ranking government officials or their spouses.

Among other charges, Chung allegedly fabricated and used award certificates to help the couple's daughter get into medical school.

The prosecution is also examining whether was involved in the improper issuance of an internship certificate for the couple's daughter’ by Seoul National University’s Center for Public Interest and Human Rights Law in 2009.

They believe the certificate was improperly issued as the daughter did not faithfully perform the responsibilities associated with the internship.

Prosecutors are also probing 12 million won in scholarship funds offered to the her less-than-stellar academic performance.

The prosecution also plans to find out whether was aware of or involved in his wife's investments into a private equity fund and WFM, a listed lithium-ion battery firm.

Throughout the probe, Cho reportedly exercised his right to remain silent.