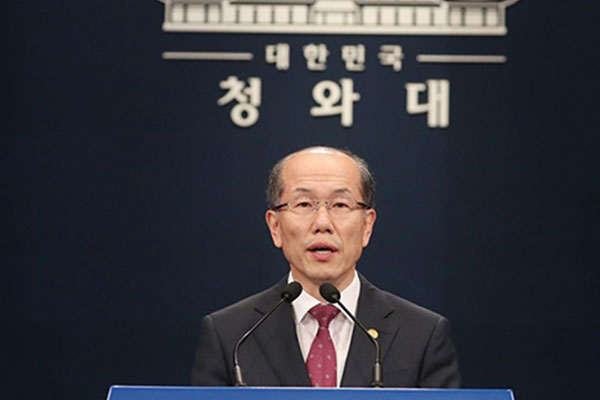 Seoul has temporarily put off the expiration of the General Security of Military Information Agreement, or GSOMIA, with Japan.

The military intelligence sharing agreement was set to end Friday at in a last-ditch effort, Seoul and Tokyo explored the possibility of pushing back the expiration date and creating a grace period to find a solution.

After the final decision was reached at the National Security Council meeting on Friday, deputy national security adviser Kim You- held a news conference just six hours before the pact was set to expire.

"The South Korean and Japanese governments have decided to announce simultaneously our respective decisions aimed at resolving bilateral pending issues. Based on the condition that the effect of the General Security of Military Information Agreement can expire at , our government will nullify our August 23, 2019 notification [to Japan] of the deal's expiration. The Japanese government expressed its acceptance."

A presidential official in Seoul explained that the expiration of GSOMIA is only temporarily on hold and the grace period will not continue for long. During that time, Seoul and Tokyo are planning to hold director-level talks to discuss Japan's tough export control measures against South Korea.

Signed in November of 2016, GSOMIA has served as a platform for S-led trilateral security cooperation with South Korea and Japan. However, the uncertain fate of the pact has recently been an indicator of deteriorating Seoul-Tokyo relations.

After the South Korean Supreme Court ordered Japanese companies to compensate the victims of colonial-era forced labor, Tokyo in July toughened export control measures on key high-tech materials that South Korea imports to produce semiconductors and displays. Seoul in response announced the following month that it could not maintain the military intelligence pact with Tokyo.