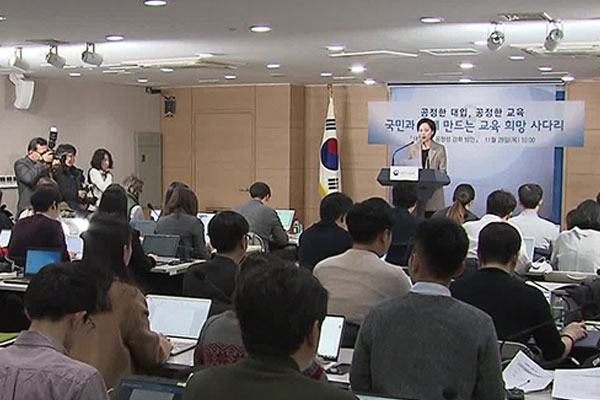 Major universities in Seoul will soon select at least 40 percent of their students primarily based on the results of the standardized college entrance exam known as the College Scholastic Ability TestCSAT).

The Education Ministry announced the plan on Thursday in an effort to enhance fairness in college admissions, explaining that it will be fully implemented by 2023.

Under the plan, 16 major universities will reserve at least 40 percent of available admissions spots for applicants that do well on the CSAT under a regular admissions process.

The universities that will implement the plan include what are conventionally considered to be the city’s three most prestigious institutions: Seoul National University, Korea University and Yonsei University.

The 16 schools currently devote a considerable portion of their yearly intake to early admissions, which weighs test scores along with other academic achievements, extracurricular activities and a personal introduction essay.

The ministry plans to eliminate the essay requirement along with high school teacher recommendations in a bid to lessen inequality in college admission outcomes between students from privileged and underprivileged backgrounds.

The announcement comes amid growing cynicism about the early admissions process following allegations that former Justice Minister Cho Kuk and his wife unfairly aided their daughter's admission to and medical school.