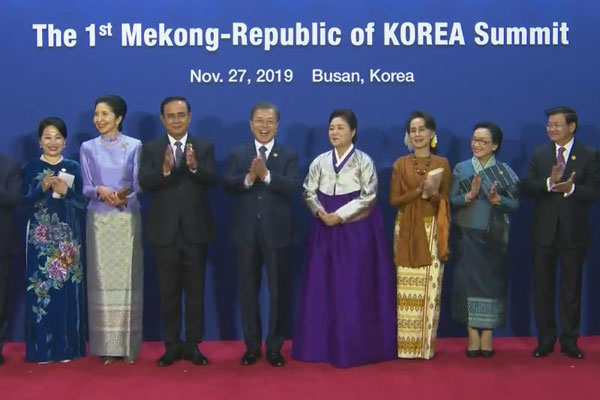 President Moon Jae-in and leaders from the ten Association of Southeast Asian NationsASEAN) member states adopted a joint vision statement on the second day of the ASEAN-South Korea Commemorative Summit in Busan on Tuesday.

The vision statement seeks to bolster ties between South Korea and ASEAN for peace and prosperity.

The signatories agreed to contribute to lasting peace, security and stability, including using ASEAN-led mechanisms to support of the Korean Peninsula.

They also agreed to strengthen cooperation to address non-traditional security challenges such as transnational crime, terrorism and violent extremism, as well as to further bolster cooperation.

Moon and his ASEAN member counterparts reaffirmed their commitment to free trade, saying they oppose protectionism of any kind and vowing to promote trade and investment for regional development and prosperity. They also stressed cooperation to lessen development disparities in the region.

Reinforcing the Southeast Asian bloc’s articulated vision of an integrated, peaceful and stable community, the leaders agreed at the special summit to accelerate co-prosperity in the region through joint endeavors including freer movement of goods and services.

South Korea and ASEAN will intensify technical and financial support in the areas of sustainable infrastructure, digital innovation, seamless logistics, regulatory excellence and mobility to facilitate cross-border trade and movement of people to enhance regional connectivity.

Commemorating the 30th anniversary since the launch of bilateral dialogue between South Korea and ASEAN, the presidential office noted that the joint vision points the direction future cooperation should head toward.

After the two day summit with the representatives of ASEAN nations, President Moon Jae-in and his counterparts from the five Mekong River nations sought ways to deepen their cooperation during an inaugural summit held in Busan on Wednesday.

Following the inaugural Mekong-Republic of Korea Summit, President Moon Jae-in laid out a blueprint of the vision set forth between him and the leaders of Cambodia, Laos, Myanmar, Thailand and Vietnam.

"The Mekong [nations] and South Korea will share their experiences and move toward co-prosperity. The Korea Development Institute and the Korea Institute of Science and Technology were the cornerstones of South Korea's economic development. Based on this model, we decided to establish [similar] public research institutes in the Mekong nations and bolster cooperation in public administration. We will collectively respond to the Fourth Industrial Revolution and launch ICT-based projects in the areas of education, new growth industries and forestry conservation, while jointly fostering innovative personnel for the future."

Seoul agreed to support the Mekong region's agricultural and rural development based on its own experiences, such as the Movement from the 1970s, and promote regional connectivity through various infrastructure projects.

"We agreed to more closely cooperate for sustainable prosperity. We will jointly handle basins surrounding the Mekong River and strengthen cooperation in biodiversity, water resources and forestry. Through a South Korea-Mekong biodiversity center set to be established in the region, we plan to preserve the Mekong's abundant biological resources and discover valuable biological resources to secure a new growth engine for the bio industry. The South Korea-Mekong water center set to be established under Seoul's state-run K-water, will become the basis for safe and efficient use of the Mekong River's rich resources."

The leaders also discussed Moon's peace efforts involving North Korea, where Mekong counterparts reaffirmed their intent to work with Seoul in realizing complete and the establishment of lasting peace on the peninsula.

The leaders designated 2021, which marks the tenth anniversary of their foreign ministers' dialogue, as a year to promote cultural and people-to-people exchanges.

The Mekong-South Korea summit meeting will also be held alongside a series of forums hosted by the Association of Southeast Asian NationsASEAN) every year.