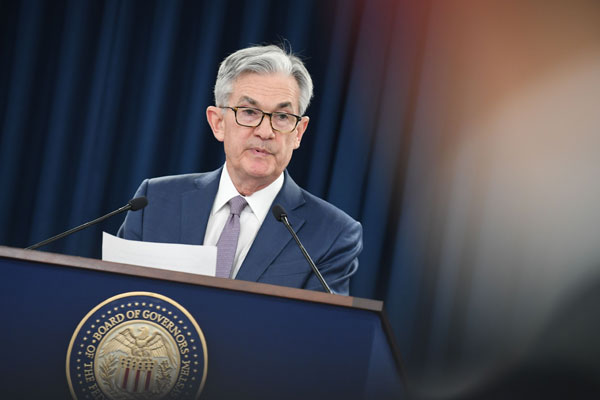 The Group of Seven nations or G7 to employ all policy tools to respond to the outbreak. The U.S. slashed its key rate and major world economies have begun to take joint response measures amid concerns of a recession. South Korea has drawn up an eleven-point-seven trillion won supplementary budget to fight the infectious disease, support victims and cushion its impact on the economy.

The U.S. on Tuesday cut its benchmark interest rate by 50 basis points.  The emergency half-percentage point rate cut was a surprise move, veering off from the Fed's ordinary rule of adjusting the rate in baby steps by typically a quarter percentage .

A Federal Open Market Committee meeting was held Monday night and the rate cut was unanimously approved Tuesday morning. A regular FOMC meeting was scheduled for the 18th. Back in 2008 during the global financial crisis, the U.S. had also lowered the key rate before its scheduled rate-setting meeting.  The half-percentage point cut is also the largest since late 2008. All this means the Federal Reserve is viewing the current situation very seriously.

the finance ministers and central bank chiefs of G7 nations held a phone conversation and issued a joint statement, declaring to use "all appropriate policy tools" to mitigate COVID-19's economic impact.

The wording was understood to include rate cuts and quantitative easing, and in fact just hours later, the U.S. decision was announced.

Analysts believe that other countries will now be encouraged to implement fiscal easing following the U.S. as they were until now worried about interest rate gap with the U.S.

So far this year, around 20 emerging economies have lowered their key rates and the number is expected to rise with the spread of COVID-19. Australia for cut its rate to a record low of 0.5%.

Such global response is viewed as a preemptive move against of the continued spread of the virus and its economic impact.

The number of infections has also topped ten-thousand worldwide outside of China.

As for South Korea, its central bank froze its key rate for this month but following the U.S. cut, it may now be pressured to follow suit.

The government has drawn up a supplementary budget worth eleven-point-seven trillion won, or more than nine-point-eight billion US dollars, surpassing the amount of a similar extra budget drafted during the 2015 MERS outbreak.

Including the latest budget, the economic stimulus package on fighting COVID-19 put together by the government and public sector so far totals 31.6 trillion won.

Moon Jae-in has issued an apology over glitches in the government supply of face masks to the public. He said the entire country is at the infectious disease and called on government agencies to operate on emergency mode around-the-clock.

The government has also begun to restrict the number of face masks purchased at pharmacies to two per person per week.