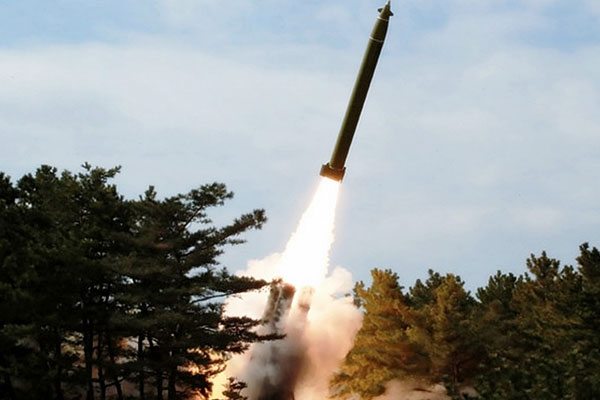 South Korea's Joint Chiefs of StaffJCS) said last Monday that North Korea fired two projectiles into the East Sea from an area near the coastal city of Wonsan in Gangwon Province. The projectiles traveled 240 kilometers reaching an altitude of 35 kilometers. The show of force came just a day after President Moon Jae-in called for inter-Korean cooperation in the health sector amid the outbreak.

Regarding the latest launch, the JCS said that North Korea is believed to be continuing its joint strike drill which began on February 28th. Many experts speculate the launch was part of the latter stage of the strike drill held a winter exercise.

North Korean state media said that leader Kim Jong- supervised the February 28th drill that was designed to assess the mobility and strike ability of defense units on the front and in the eastern area.

The South Korean military has described them as "short-range projectiles suspected to be ballistic missiles."

North Korea is recently known to have equipped its rocket launchers with a guidance system in an effort to improve on accuracy.  The North's 300 millimeter multiple rocket launcher likely has a range of 200 kilometers while the so-called super-large launcher boasts a range of 400 kilometers which essentially makes it a short-range ballistic missile.

Considering Pyongyang's slogan of bolstering national power emphasized since last year, the South Korean military believes the latest drill is an extension of efforts to beef up military strength.

The North held joint strike drills also in 2015, '16 and '17 but this year's February exercise was scale so far.

The fact the regime relatively quiet after threatening to take real action last year also implies North Korea may be adjusting its overall activity amid present circumstances including the COVID-19 situation.

The virus outbreak has led to a border closure with China, making domestic conditions in the North even more difficult.

COVID-19, in addition to global sanctions, may well be pushing the regime to its limit.

The projectile launch came a day after President Moon urged the two Koreas to cooperate public health and to abide by the September 2018 joint military agreement.