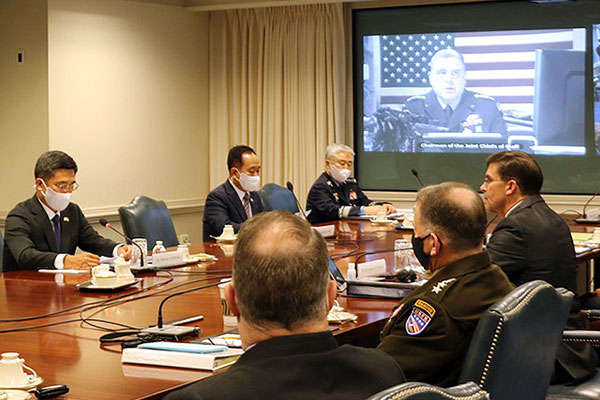 South Korea and the United States seemingly differed on the conditions-based transfer of wartime operational control(OPCON) from Washington to Seoul. Speculation on a rift between the allies over pending issues further rose when the U.S. called off a scheduled press conference at the last minute.

U.S. Secretary of Defense Mark Esper said on Wednesday that while Washington is committed to the envisioned transfer of wartime operational control(OPCON) to Seoul, it will take time to fully meet the required conditions.

The remarks came at the start of the 52nd Security Consultative Meeting(SCM) in Washington, amid growing speculation that the conditions-based transfer is unlikely to be completed before President Moon Jae-in's term ends in May 2022.

[US Secretary of Defense Mark Esper]

"Fully meeting all the conditions for the transition of operational control to the Republic of Korea(ROK) commander will take time, but the process of doing so will strengthen our alliance."

Esper's remarks are in stark contrast to that of South Korean Defense Minister Suh Wook.

"We will also work together to thoroughly prepare for a combined defense posture under the South Korean military's leadership by fulfilling the conditions as early as possible through evaluation of the allies' efforts for the OPCON transition and discuss future plans."

On the allies' delayed renewal of a cost-sharing deal for the upkeep of the U.S. Forces Korea(USFK), Esper stressed that the cost-sharing shouldn't unfairly burden American taxpayers.

[US Secretary of Defense Mark Esper]

"We must find more equitable means of sharing the costs of our common defense, so it doesn't fall unequally on American taxpayers. The United States urges the Republic of Korea, as well as NATO and other allies, to contribute more to our collective security."

Following the talks, the two sides issued a joint communique which didn't mention the U.S.' commitment to maintaining its troop levels as it did the previous year, spurring media suspicion on a U.S. military reduction on the Korean Peninsula.

This comes as U.S. President Donald Trump has reportedly instructed officials to use a possible withdrawal of American troops as a bargaining chip in the cost-sharing agreement negotiations.

Meanwhile, a previously scheduled joint press conference on the SCM was cancelled upon Washington's request, raising further speculation about the allies' widening difference on pending issues.

South Korea's national security advisor said on Thursday that the declaration of a formal end to the Korean War cannot be separated from the denuclearization process of the Korean Peninsula, adding it is "common sense" that the two issues go together.

Suh Hoon, director of South Korea's National Security Office, made the remarks to reporters after his meeting with U.S. Secretary of State Mike Pompeo at the State Department in Washington.

The security adviser said declaring the war's end is not a new issue, adding it has always been on the negotiating table and there can be no different views regarding the issue between South Korea and the U.S.

Suh said the only issue is when the declaration should be made in the process to denuclearize North Korea and how closely it should be tied to the process.

However, in a statement to Radio Free Asia after Suh’s comments, the U.S. State Department said the offer of a war-ending declaration remains on the table and that it's willing to take a flexible approach to reach a balanced agreement on all of the Singapore summit commitments.

It added the U.S. is committed to engaging North Korea in meaningful negotiations so the North Korean people can realize a brighter future.