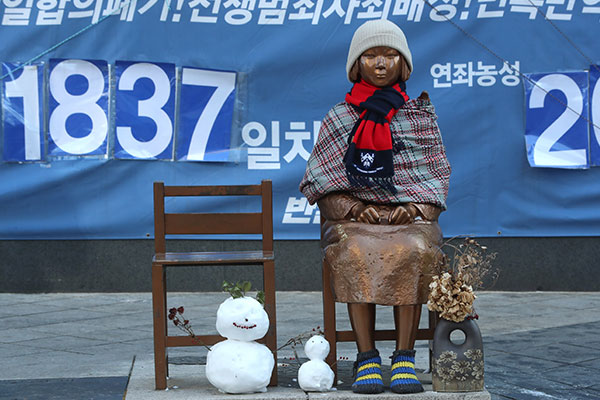 A Seoul court on Friday ruled in favor of 12 Korean victims of Japan's wartime sexual slavery, ordering Tokyo to pay each victim 100 million won in compensation. The already-strained Seoul-Tokyo relations over the forced labor issue and Japan's export curbs are expected to take a turn for the worse.

This is the first time that a South Korean court has ruled in the victims' favor in a compensation suit filed against Japan.

The verdict said evidence, relevant records and testimonies have shown that the victims suffered from extreme and unimaginable mental and physical pain because of the unlawful acts committed by the accused, and that they were never compensated.

In August 2013, the victims, including now-deceased Bae Chun-hee, filed a petition for dispute settlement, claiming that they were either tricked or coerced into sexual slavery. The victims sought compensation of 100 million won each.

The process, however, never moved forward after Tokyo refused to accept relevant documents from a Seoul court. It was finally referred to a court in January 2016, after which four hearings were held from April to October last year.

It added that the plaintiffs' right to seek compensation is not determined by the 1965 treaty that normalized bilateral relations or the 2015 Seoul-Tokyo deal that sought to settle the sexual slavery issue.

Although it has no plans to appeal, Tokyo refused to accept Friday's ruling. Japan's Foreign Ministry summoned South Korean Ambassador to Tokyo Nam Kwan-pyo in protest.

The latest development is expected to aggravate bilateral relations, already frayed over the 2018 South Korean top court rulings on the compensation of Korean victims of Japan's wartime forced labor and retaliatory export curbs.

Only five of the 12 plaintiffs are still alive. While historians estimate there were around 200-thousand victims, mostly from Korea, there are 16 surviving victims registered with the South Korean government.

According to Seoul's Foreign Ministry, Kang held a 20-minute phone call with her Japanese counterpart Toshimitsu Motegi on Saturday at his request and the two discussed the latest court ruling.

Motegi conveyed his government's stance while Kang urged against an excessive response from Japan.

The two sides agreed to continue close communication between their diplomatic authorities on various bilateral issues.