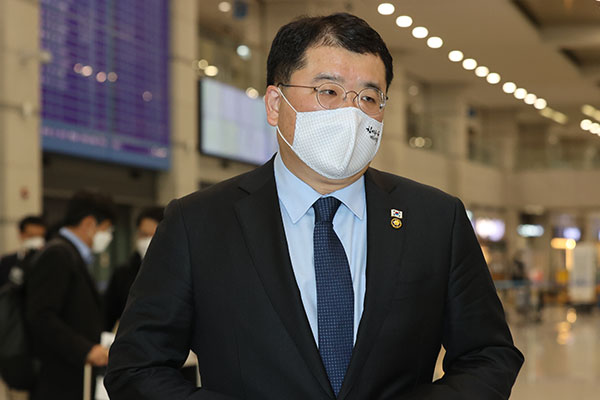 Choi said he believes that the Iranian government will promptly take steps to release the vessel and its crew, despite falling short of expectations for their release during his visit.

The vice minister said he delivered Seoul's position in a stern manner, while also listening to Tehran's frustrations over its seven billion dollars left frozen in two South Korean banks due to U.S. sanctions.

According to the Iranian government's official website on Thursday, Deputy Justice Minister Mahmoud Hekmatnia told Choi during their meeting that the tanker seizure is a "technical" matter, under the discretion of the country's judiciary.

Tehran did not produce evidence to the claim that the Korean tanker was polluting its waters, despite repeated requests by Seoul.

Hekmatnia, instead, focused on the frozen assets, urging Seoul to remove all obstacles in the promotion of bilateral relations.